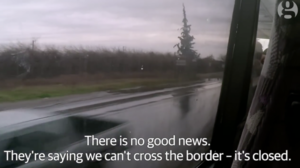 Rania Mustafa Ali, 20, filmed her journey [in 2016] from the ruins of Kobane in Syria to Austria. She is cheated by smugglers, teargassed and beaten at the Macedonian border. She risks drowning in the Mediterranean, travelling in a boat meant to hold 15 people but stuffed with 52. Her footage shows what many refugees face on their perilous journey to Europe.

Escape From Syria was produced and directed by Anders Hammer

Escape From Syria (The Guardian)

Previously: When People Are No Longer Considered People

Meanwhile At The Greece/FYROM Border

The Department of Justice has said a further 440 refugees have been cleared to travel from Greece to Ireland, bringing the total to 900.

The Government pledged to take in a total of 4,000 refugees under the Irish Refugee Protection Programme.

However, just half of that number will have arrived by the end of the year.

Ireland has taken in 1,244 refugees to date from countries such as Syria since the programme was announced in 2015.

There are two separate schemes under which refugees come to Ireland.

Under what is known as the resettlement programme, the Government has committed to taking in 1,040 people from Lebanon.

In total, 785 people have arrived so far and the Government says the remaining 255 will arrive by the end of the year.

440 refugees cleared to travel to Ireland from Greece (RTE)

5 thoughts on “From Kobane To Austria”