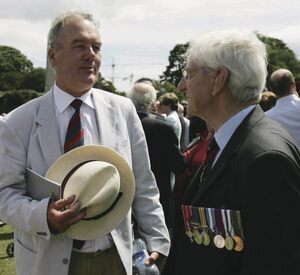 From top: Kevin Myers (left) and Major Gen David O’Morochoe, of the Royal British Legion at the 90th Anniversary Commemoration, of the Battle of the Somme, in the Irish National War Memorial Park, in Dublin; Dan Boyle

I was considering presenting a defence of Kevin Myers. Not a particular defence (I’ve never really been a fan), more of a general defence on the role of contrarians in helping to provoke a better, more democratic discourse.

In the right hands, a well aimed epistle can expose any amount of sanctimony or complacency that would exist around an issue.

There is an honourable tradition in stand up comedy that has causing offence as a pre-requisite in bringing about laughter. The acts of Lenny Bruce, Bill Hicks and the earlier career of Tommy Tiernan, revolved around this premise.

Getting the tone right, so that it is understood that a subject is being lampooned not emulated, is an advantage that live performance has over the written word.

If Myers’ earlier work carried a hint of satire, that would soon dissipate. His scribblings became a parody of the parody he may have thought he was creating.

His cultured tone, combined with his stylised writing, allowed him to coast for several years. Both combined to create an impression that he possessed a keen intelligence, which gave him a credibility to write what he liked, how he liked.

The more blatant the allusion, the more generalised the insult, the more pleased he seemed to be that he was advocating a ‘truth’. The real truth was that he was far from the iconoclast he believed himself to be. He has been one of many participants in a tired and tawdry genre.

He and his ilk have constructed a colour by numbers approach to controversy. The easy target in their eyes being the existence of political correctness.

This code, this voluntary code, has been exaggerated as being the enemy of our time, by right wing contrarians. PC, to my mind, is an ethic to try to avoid the demonisation of entire groups of people on the basis of generalised prejudice.

To the ‘freedom mongers’ of right wing contrarians, PC is the slippery slope towards equating any type of sensitivity as being the same. This reductio ad absurdum approach has become the most boring aspect of this type of writing. It has pushed no barriers. It has merely succeeded in digging deeper holes.

It is sad, as Myers could once have been described as being a good journalist. His earlier work in Northern Ireland has been rightly praised, even if his memoir of the time concentrated as much on his sense of priapic brilliance.

The diminishing returns of his subsequent career has been enabled by several publications and by many commissioning editors. A media more intent on provoking a response, rather than informing and subsequently reflecting public opinion, will unfortunately always have room for a Kevin Myers.

The problem isn’t really with the prejudices being peddled, but with the ‘truths’ being asserted. A recent Myers article, that was probably more nodded on than saw fists shook against it, saw him fulminate against wind turbines.

Every ‘fact’ he presented in the article, every single fact, was incorrect. Facts, real facts, undermine prejudice. The truth undoes us all.

54 thoughts on “Shooting The Messenger”