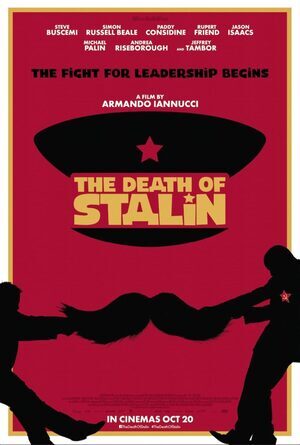 1. Here comes comedy royalty Armando Iannucci, creator of (among others) The Thick of It, In the Loop, Veep, The Day Today, Time Trumpet and more, with his second big-screen outing The Death of Stalin. It appears that one of the great satirists of our time has decided that the modern world is indeed beyond satire, so there is no point anymore.

2. Instead, he has assembled a remarkable cast to throw back to Moscow in the 1950s when, upon the death of soviet dictator Stalin, various factions within the Soviet Central Committee began squabbling over who could, should and would succeed him.

3. The film is based on the graphic novel of the same name by Fabien Nury.

5. As if it wasn’t perfectly obvious, that thing about modern life being beyond satire is even more accurate than you think. At a recent talk in Sydney, Iannucci revealed an unused story for The Thick of It was for a politician to walk to Westminster in order to seem “more relatable”, only to insist on a car following behind to carry his briefcase. The idea was eventually abandoned the idea because it seemed just a little too unrealistic.

6. Some months later, it emerged David Cameron was keen on cycling to the House of Commons…with a car following behind containing shoes and a clean shirt.

7. After that you can see why the decision was taken not to drag The Thick of It out any longer than it had to. Why waste time hanging politicians out to dry when they’re perfectly capable of doing it themselves?

8. Anyway, The Death of Stalin screens at the Toronto Film Festival next month, and will arrive in cinemas in October.

9. Speaking of Stalin, any excuse. “Not a lot of people” know about this historical TV drama with just about the greatest piece of casting you’ve ever seen.

Is RTE Lol-ing At Its Own Since opening our doors in 2003, has delivered thousands of web and digital experiences, across a multitude of website platforms alarge enough to offer you the knowledge and expertise we’ve gained servicing the Corporate and loveparadesf Government sectors, yet small enough to care. .

10 thoughts on “Broadsheet Trailer Park: The Death Of Stalin”