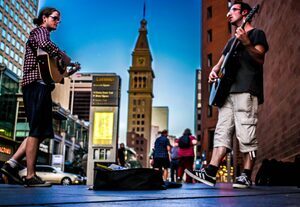 This Summer, filmmaker and musician Rob Reeves is crossing America in extremely low budget fashion with his pal Moogle and their guitars.

You may have seen some of his vox pops from New York and Miami (at link below).

Rob and Moogle have now made it to LA where Rob sent this latest dispatch.

Me and old moogle are jazzed off our beans in a carpark in Venice. We’ve been in LA six hours and Moogle’s already met a publicist in an iHop. We walked thru skid row earlier, never met a nightmare like it. There’s 40,000 homeless in downtown alone and they’re all contained in these dirty blocks; the only place police won’t move em on.

Tent after tent line the footpaths and the air tastes like dirty people left to die. It’s a refugee camp, safe enough to walk through because everyone’s so out of it, all smelling because they’re all rotting. Skid row is a genocide and LA is a third world country.

It pissed down a fair bit in Denver, which was inconvenient because we spent three nights sleeping in that tent of ours. Moogle hates the tent, no sleeping bags or whatever, I just hate the rain.

Got to Denver hitchhiking from Colorado Springs with a Mexican guy who married a 14 year old when he was 28. They had their first kid when she was 15. He spent thirteen years being a big time drug dealer before he did five years for smuggling heroin and got all his cars and houses seized by the government.

When he got out he bought his way out of the Cartel and now he’s an electrician. Nice guy with some disturbing stories. He’s 41 and the wife is now 27, still together and happily married with eight kids.

In Denver we spent our first night sleeping above the city skyline and woke at 6.30am to a Park Ranger informing us we weren’t allowed to camp there. Grand vibes cos we’d cheated six and a half hours of free sleep. After we gathered our things we spent the first 6 hours of the day unsuccessfully trying to hitchhike further West and the second half unsuccessfully trying to earn money through music. We slept that night in an up market housing estate off Sloan’s Lake.

Around Midnight we’d stealthily went about pitching our tent on the corner of a green when this whizzing sound started. By the time we’d realised what was happening we were soaked to the bone. Posh people and their automated sprinklers. We moved down the green and camped in the middle of some trees. We got going at half seven the following morning and nobody had noticed a thing.

We slept in the same place the next night too. At 2am we awoke to the rain hitting the tent. The rain grew harder and the sky was suddenly roaring. The lightening began illuminating our faces.

The infinity above was an erupting volcano. I began to google the circumstances in which you’re at risk of being struck by lightening. Turns out me and ole Moogle were definitely about to die. We called an Uber pronto, grabbed our stuff minus the tent and slept in shifts at a 24 hour cafe.

We went back at 8am and collected the tent. We sat on a bench by the lake and sullenly watched our detested home dry out. A homeless woman approached and handed us some breakfast, just doing her bit to help out those less fortunate. We showered that night in an Airbnb and fucked off on a bus to LA the following morning.

Spent last night sleeping on a greyhound and tonight in this carpark playing music and writing.

Venice is magic. Long haired fathers teach their long haired sons in skateparks. Homeless guys not yet for skid row ride BMXs here. Girls glide beautifully on rollerblades and the sunsets are paintings on the water.

4 thoughts on “On The Road”