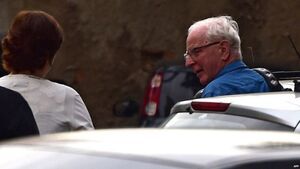 €60,000 paid to Mr Hickey was far in excess of what might reasonably be considered an honorarium, says Shane Ross #iestaff

“Judge Moran has exposed the stress and frustration caused to athletes, their families and their friends by the OCI’s appointment of a ticketing agent that was nothing other than a charade and totally unfit for purpose…

…He [Justice Moran] was not in pursuit of criminality, merely a narrative of events, however unpalatable….

Nothing in this report suggests that individuals in the OCI were benefiting personally from these arrangements.

But clearly commercial interests can never again be afforded priority over the interests of athletes, their friends and families, and ordinary spectators.I regret that the OCI under the leadership of Pat Hickey defined this doctrine.”

Shane Ross at the Transport, Tourism and Sport joint committee meeting this morning.

The ‘rotten culture’ of the OCI under Pat Hickey has been revealed – Shane Ross (Kevin Doyle, Irish Independent)

‘I May Or May Not Speak To Them’

13 thoughts on “A Dish Served Cold”