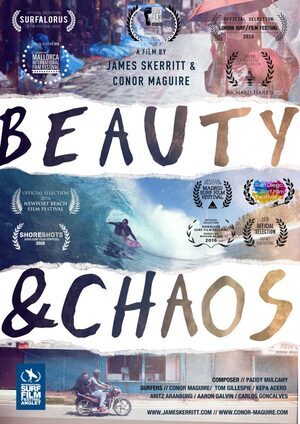 Available online for the first time.

It all started with a Facebook message from Conor Maguire simply saying ‘lets go to India’. We had discussed trying to make a film like this for years – an honest, or somewhat, portrait of what we were feeling as we roamed from place to place. We wanted the music to do the same.

I showed a friend of mine an early cut of the film and told him the title. I was greeted with a frown along with the notion that it was the worst title he had ever heard.

None the less, ‘Beauty & Chaos’, had its first screening at Shore Shots Surf Film Festival in April 16.and spent the following year screening in film festivals around the world with its last set of screenings throughout May this year.

I was even more pleasantly surprised after a festival in New Jersey, where a filmmaker whom I admire commented on how much she likes the title.

Like most films, I am always motivated by how much fun it will be to watch in about forty years time – a remembrance of the random happenings that come about in the unknown and unsure. So whether you like the title or not – it was a damn interesting process to go through.’

For Your Consideration: Surviving Ireland

For Your Consideration: We Are Voyagers

3 thoughts on “For Your Consideration: Beauty & Chaos”