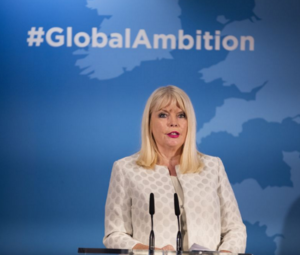 On RTÉ One’s News at One.

Readers may recall how Taoiseach Leo Varadkar reshuffled the Cabinet in June.

As part of this, Mr Varadkar appointed Ms O’Connor, the former Minister for Jobs, Enterprise and Innovation, to the position of Minister of State with Responsibility for Higher Education – a super junior ministry.

The appointment reportedly followed Ms O’Connor turning down an offer of a junior ministry in the Department of Justice.

They both receive an extra €16,288-a-year allowance on top of their salary for the super junior position.

It was also reported at the time that the Dail would have to pass legislation to create the position for Ms O’Connor because existing legislation states the Taoiseach can appoint a maximum of two super junior ministers who can sit at the Cabinet table.

Ms Shanley asked Ms O’Connor about the matter and she said:

“I’m delighted to be at that Cabinet table. Money has never really been the biggest issue for me. Am I going out searching for it and shouting and roaring? No.

“And I want to have the same wages as, you know, as my counterparts. But, to be honest, out there, I’m just saying it to the listeners, it’s not the be all for me.

“It’s really important that I do the job that I’m asked and tasked to do.”

‘Put In Something About Jobs, Enterprise and Innovation’