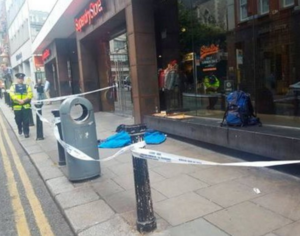 The man’s name has not yet been released.

CEO of Inner City Helping Homeless, Anthony Flynn, said more needs to be done to help get rough sleepers off the streets.

He said: “This was a tragic but preventable accident. Dublin’s rough sleeper crisis is out of control with our outreach teams last week reporting the highest ever number of rough sleepers on one night.”

“Immediate emergency measures must are required now to tackle the rough sleeper crisis. I’m calling on the Minister to immediately open empty beds, this is not the first and will not be the last death on our streets.”

Homeless man dies outside Superdry in Dublin with gardai sealing off the scene (Lauren Kelly, The Irish Sun)

Previously: Look After Your Friends

10 thoughts on “A Death On Suffolk Street”