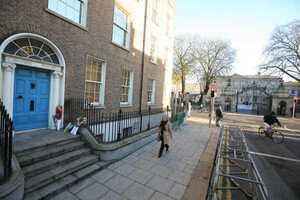 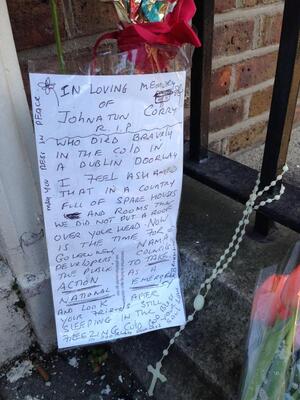 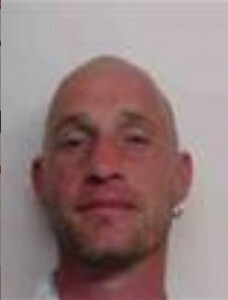 A tribute (top) to Jonathan Corrie (centre) at the doorstep on Molesworth Street, Dublin where he was found dead yesterday. The dedication was read out by Sinn Féin President Gerry Adams in the Dáil this afternoon. 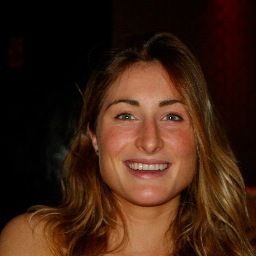 Sean O’Rourke: “Yesterday morning a man was found on a Dublin city centre street. His name was Jonathan Corrie. He was only 43. The person who found him joins me now. Sophie Pigot, good morning to you. You were on your way to work yesterday, you were making your way through Molesworth Street in Dublin city centre, what made you stop?

Pigot: “I went over and I tried to speak to him, I said ‘Sir’ a few times, ‘Can you hear me, are you okay Sir, are you all right?’ and he didn’t answer so I placed my hands on his back and he just…when I felt his back, it just didn’t, it didn’t feel right, now I didn’t stay for very long, I didn’t have my phone charged so I ran across the road to the Dail because it was the location of… the building was right opposite, it was, you know, the nearest group of people that I knew I could ask to borrow their phone or something so I went in, the receptionist greeted me and addressed me to a guard whom I informed ‘I think there’s a man very injured or sick, there’s something wrong he’s lying on the ground, please can you call an ambulance?’and then the guard was unable to leave his post where he was, I said ‘I don’t know if he’s dead or not’, so I ran back over while they were calling the ambulance… just to check and see how he is so I went back over and did the same thing and then I put my hand on his back again and I felt for his pulse, there was no pulse he was cold, I was quite sure he was dead at that point then.”

O’Rourke: “So what did you do at that stage, Sophie?”

Pigot: “Well, I was just standing there, I didn’t know what to do, all I knew was there was a man, I suppose, open to the world here, a really sad moment, so a couple of people had arrived, then three others, and I ended up then just going across to Buswells, they kindly gave me a tablecloth, like a tablecloth, just to put over him in dignity and I just waited then for the guards to arrive and in the meantime the group of people who I was standing with, they had recognized him and that he had a friend he was often seen with, another homeless man, they went and got him, he arrived and at that stage the guards were there, they took a couple of our details. I just left I didn’t know what else to do I suppose.”

O’Rourke: “Sophie, I understand you are in your mid twenties. I’m wondering what training you have had what gave you the confidence to check Johnny Corrie’s pulse?”

Pigot: “Well, I’m a part-time… I’m a avid surfer and when I was younger I used to teach surfing so I’m a trained lifeguard, so I have kept that up you know throughout the years or however, just do retraining every year so I’ve been trained in it, so it was just an immediate reaction my main worry was, you know, I didn’t know if he was alive or not and I didn’t want to be standing there like a useless person waiting for an ambulance if the man wasn’t alive, you know, in the cold it was quite a cold morning yesterday, you know and he was an very uncomfortable position but…”

O’Rourke: “It wouldn’t be unusual not by any manner or means Sophie to see a man slumped on steps on that general area but something, there seems to be something about what happened yesterday that made you stop?”

Pigot: “I don’t know what it was, like people keep asking me why I stopped, but it’s kind of reflective the last few days, why don’t I stop, I pass people crying on the street as in actually crying, and I really don’t know how to answer that question, he just looked like he was very uncomfortable, if he had woken up the least I could do buy him a coffee or something, you know, I would have, that would have been more what I was expecting would happen, be on my way not think twice about it.”

O’Rourke: “How long did you remain there at the steps was it until the ambulance came or not?”

Pigot: “When the guards arrived, it was quite obvious he was covered by the sheet at this stage but they confirmed that he was, it was obvious he had passed away so… I found him at just around ten to eight, I left the scene by half eight.”

O’Rourke: “And how were you affected by this afterwards? How did you get on during the rest of the day and say last night?”

Pigot: “During the day I suppose I was just in shock, it’s not really something you bring up in meetings or at work, I’ve class till… I’m in King’s Inns ,over the other side of town until late anyway. I didn’t really process it till last night when I was back in my house, really you just realize how unbelievably lucky you are and I mean, also I got so many…what a response… people are saying to me really kind words but I don’t deserve them I just kind of was there, and it just makes you realise that people do care… I suppose we… it’s become acceptable to act like homeless people are invisible and I think when people look at themselves in the mirror we realise that and that’s what I feel right now.”

O’Rourke: “What would you like to come out of this experience and this event?”

Pigot: “I’m like literally a kind of … my own personal view now, I think that we’re a tiny country, this man could be my second cousin, you know, it’s absurd that we as a society have become immune to this situation, so whether that’s, whatever you’re working, whether you’re a politician or whether you work in the civil service, whether you’re working or not working, so, you know that we start to address this situation, like I mean there are fantastic organisations out there like Focus Ireland or the Simon Community and many others and I think the issue needs to get the attention long-term, I think I caught the end of the news there, I think, I don’t know what it was, but I think I heard someone saying, this has to be a long-term approach, we can’t all stand in glass houses and blame other people, I mean it’s a shopping period now for about 23 days, we’re going to spend an enormous amount of money on family, friends probably maybe even a colleague or two and there’ll be these people perfectly visible round us and we seem to feel like they’re invisible, myself included.”

Sophie Pigot is rightly praised for not stepping over Johnny’s corpse and instead getting a policeman at Leinster House to call for an ambulance – but is this what we have come to?
Have we fallen so far as a society that we must make a heroine of someone who does exactly what one is supposed to do when they see another human being in need?
Johnny Corrie died in a Dublin doorway on December 1 2014, but he didn’t die alone.
Every one of us played a part in creating the country in which he could die so publicly, so helplessly, so needlessly. We all stood over him as he passed on.
And none of us did anything, and now it’s too late.

We All Killed Jonathan Corrie (Philip O’Connor, Our Man In Stockholm)

Earlier: Do Look In Anger

72 thoughts on “Look After Your Friends”