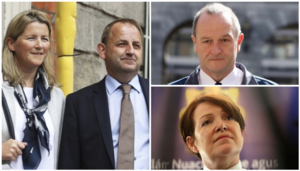 Readers will recall the Commission of Investigation into allegations of Garda misconduct by Garda whistleblower Sgt Maurice McCabe, overseen by Judge Kevin O’Higgins, in 2015.

In the wake of the publication of the commission’s report, in May 2016, it emerged that it failed to report certain matters that happened during the commission.

Michael Clifford, in the Irish Examiner, reported that, at the beginning of the proceedings, Colm Smyth SC, for the Garda Commissioner Noirin O’Sullivan, said that evidence would be produced to show that Sgt McCabe had told two other gardai that he made the complaints out of malice at a meeting in Mullingar in August 2008.

However, what hasn’t been reported is what the gardai alleged motivated Sgt McCabe to act out of malice. Today, we can reveal what this is.

Judge O’Higgins was told that Sgt McCabe acted out of malice because he wanted the DPP’s directions made in respect of Ms D’s 2006 “humping” allegation overturned.

However, these are the DPP’s directions:

An Garda Síochána made this claim to Judge O’Higgins on the basis that it didn’t know Sgt McCabe was fully aware of the DPP’s full, seemingly unequivocal directions.

And when he made this known at the O’Higgins investigation, this claim by An Garda Siochana was also dropped – and was also never mentioned in the report.

It now seems clear that knowledge of both the O’Higgins Commission of Investigation, which was carried out in private, and the Disclosures Tribunal, which is being carried out in public, are needed to understand what happened to Sgt McCabe.

15 thoughts on “Absence Of Malice”