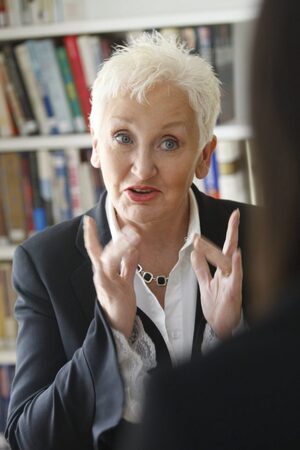 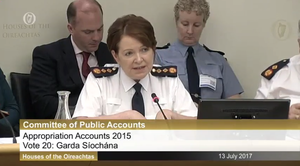 Terry Prone of the Communications Clinic and former Garda Commissioner Nóirín O’Sullivan at the Public Accounts Committee on July 13, 2017

The former Garda Commissioner Nóirín O’Sullivan was asked about this sum of €92,955 by Fianna Fáil TD Marc MacSharry, in a meeting of the Public Accounts Committee.

Ms O’Sullivan told the committee the money would have been used to train gardai to deal with local radio and media.

“As part of our modernisation and renewal programme, we have committed to opening up the organisation. I do not have the exact breakdown here, but maybe some of my colleagues do.

“The moneys would again have been spent on training Garda and civilian members around the country for interaction with local radio and local media, for example, on some of the information messages that would have gone out around Operation Thor and the “lock up and light up” campaign.

“Again, we can provide an exact breakdown or maybe some of my colleagues would have it, but that is what it would have been.”

When Mr MacSharry specifically asked Ms O’Sullivan if she had attended any media training sessions with the PR firm, Ms O’Sullivan said:

“No. Maybe it is an opportunity, if I may Chair, to do something. I have seen a lot of speculation and commentary. Particularly, I think there was a figure of €140,000 mentioned which apparently I spent in terms of preparing for Committee of Public Accounts meetings. That is completely untrue. I have never received any preparatory training. Like yourself, Chair, I am not sure where that reporting came from. Certainly, no, I did not. “

Mr MacSharry attempted to clarify further when they had this exchange:

Marc MacSharry: “So the €92,000 was for people who would have to be spokespeople for local radio after a crime or were being consulted on an issue or something.”

Ms Nóirín O’Sullivan: “And, for example, district offices. As the Deputy will have seen, one of the criticisms we have received is that we are insular and defensive. Some of the inspectorate reports quite rightly raised the fact we need to speak more openly to the media. The Deputy would have seen a lot of our local officers around the country engaging more with the media. We have found that part of public reassurance is to get on local radio stations in particular and give out messages of reassurance and crime prevention and stories of interest to local communities.”

Yesterday, John Mooney, in The Sunday Times, reported that the Disclosures Tribunal is examining advice which Terry Prone, of the Communications Clinic, gave to the former Garda Commissioner Noirin O’Sullivan in May, 2016.

Ms Prone gave this advice after it emerged that claims made by Ms O’Sullivan’s senior counsel during the O’Higgins Commission of Investigation in 2015 – that Garda whistleblower Sgt Maurice McCabe was acting out of malice – were proven to be untrue and journalists were asking Ms O’Sullivan for a comment about the same.

“The tribunal has been notified of email exchanges between senior gardai and Prone from May 2016, when the PR executive was consulted on the wording of a statement issued by the garda press office in response to media queries about O’Sullivan’s approach to McCabe at the O’Higgins Commission hearings.

“…Charleton has been given statements and documents that show Garda Headquarters held a meeting to discuss how it would respond to the issues identified by O’Higgins. The Garda press office later released three statements on the report and the leaked transcripts.

“Prone advised O’Sullivan on the second statement, which was released by the garda press office. It was an attempt to clarify the then commissioner’s role after newspapers published transcripts of the commission’s hearings. The statement, released on May 16, quoted O’Sullivan as saying she believed “dissent was not disloyalty” and she never regarded McCabe as malicious. It added that she was legally precluded from commenting on matters discussed at the commission.

“Charleton has been told the statement was circulated by O’Sullivan to Garda Headquarters on a private Gmail account, which deleted emails after 30 days, before its release. Copies were retained by Garda Headquarters as they were sent to official accounts. The email thread shows Prone had advised O’Sullivan.”

Two separate attempts earlier this year, by journalists Ali Bracken, of the Irish Daily Mail, and Ken Foxe, to obtain details of An Garda Siochana’s hiring of the Communications Clinic, under the Freedom of Information Act, have been rejected.

Two weeks ago, the Department of Justice released a series of emails which showed how, on Saturday, July 4, 2015, RTÉ journalist John Burke sent a press query to the Garda Press Office.

Subsequent to this, in an email from the Department of Justice Secretary General Office Assistant Secretary Ken O’Leary to the then Minister for Justice Frances Fitzgerald, Mr O’Leary stated Ms O’Sullivan phoned him “to let me know they had received queries from Colm O’Nongain [sic] about Sgt McCabe”.

Mr O’Leary added that the Garda Press Office was asked “was it the Garda Commissioner who had instructed counsel to adopt an aggressive stance towards Sgt McCabe at the O’Higgins Commission”.

He told Ms Fitzgerald: “The Gardai are not commenting.”

He then went on to advise Ms Fitzgerald, who was scheduled to appear on RTE’s This Week on Sunday, July 5, 2015, to say the following:

“Both the Garda Commissioner [Noirin O’Sullivan] and myself have made it clear that Sgt McCabe is a valued member of the Force.”

She was also advised to say she couldn’t comment on the O’Higgins Commission of Investigation and that:

“…it would be wrong of anyone to make public comment which might interfere with or attempt to influence those proceedings in any way.”

In addition, Mr O’Leary also told Ms Fitzgerald that she could say:

“It would be wrong of anyone to make public comment which might interfere with or attempt to influence those proceedings in any way. The Commission clearly has to be let take its course.”

In the end, Ms Fitzgerald wasn’t asked about the matter when she appeared on RTE’s This Week on Sunday, July 5, 2015.

Previously: Getting Their Story Straight