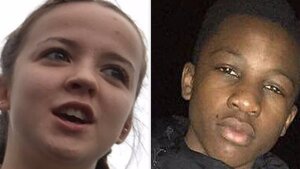 An appeal has been issued for two teenagers missing from their homes in Balbriggan since yesterday.

Nicole O’Reilly and Jason Akandu are both 14-years-old and are believed to be together.

Nicole was last seen at around 8.30am at Westbrook Drive in Balbriggan and is described as being 1.70m (5’7″) in height, with long brown hair.

She was wearing her Loreto school uniform of a green jumper and a green and navy check skirt.

Jason was last seen at around 8.50am in the Balbriggan area.

He is 1.72m (5’8″) and has black hair and was wearing his Ardgillen school uniform, consisting of a blue v-neck jumper, white shirt and black trousers.

Have You Seen Stephen?

Have You Seen Sebastian?

Have You Seen Yu?

Have You Seen José?

2 thoughts on “Have You Seen Nicole And Jason?”