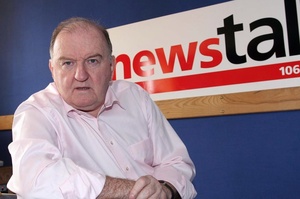 “We the undersigned wish to express our utter repudiation of the views expressed by George Hook on High Noon last Friday.

We also wish to express our profound disappointment with management in Communicorp at their failure to deal with this issue swiftly and decisively.

The longer George Hook remains on air, the more reputational damage this station will suffer: damage that will unfairly reflect on the hardworking and professional staff at Newstalk.

“George Hook doesn’t stand alone in his opinions and what we have in this country is about 10% of women who experience sexual violence are reporting it so they’re afraid to come forward because they feel that they won’t be believed or that their needs won’t be met when they do that so we have a problem and, you know, George Hook doesn’t stand alone in this and we have to work much harder to change culture in this country to address this issue.

I think you can hear over the comment the last week, since this story broke in the first place, there’s a lot of people, you know, agreeing with George Hook, but I think what I want to say is, there’s an awful lot of people that don’t agree with George Hook. And what I can see is change has already happened in this country.

Ten years ago, if George Hook made these comments, there probably wouldn’t be any reaction at all. Today there’s huge reaction.

“There’s a huge mass of people saying ‘this is unacceptable, we don’t want this on our watch’. We want to ensure that there is not victim blaming in this country and that we take the issues of rape and sexual assault seriously.

So this is hopeful, that doesn’t mean that we haven’t got an awful lot more to do. We do and we need leadership around this.

And I do commend the Dalata Hotel Group for actually taking that leadership.

“It’s leadership like that that enables the rest of us to have the courage to stay with saying ‘this is unacceptable and not on our watch’.

“And there are other sponsors as well, on Newstalk, that really need to reflect on where they’re at in this position and it would do them no harm to act with the Dalata Group and stand for what they want to see in society which is a society that is safe for women and children.

His apology is welcome but, you know, you could ask if it’s too late. I mean I do think that it’s coming to a point where I think his position is untenable within Newstalk.

But that’s, also, within Newstalk, in terms of their own leadership around this issue, have a lot to answer for.

They’re a news station that from 7am to 7pm in the day have no female voices on the radio. So in terms of leadership and in terms around equality and human rights, I think they have a few questions to answer themselves.

So I do welcome his apology but, you know, there’s been damage done as a result of a key leader on a national broadcast saying what he did say last Friday.”

96 thoughts on “Sling Your Hook”