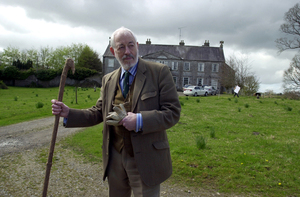 JP Donleavy at home at Levington in County Westmeath

Mr. Donleavy sometimes expressed a decidedly practical opinion about his chosen career. “One day, while innocently looking in the window of an old established cheese shop in London, the definition of what writing is all about hit me,” he told Time magazine in 1968. “Writing is turning one’s worst moments into money.”

Donleavy abandoned his studies to pursue a career in painting and set up a studio in Kilcoole, Co Wicklow. Specialising in “risqué female nudes”, he held three solo exhibitions at the Dublin Painters’ Gallery on St Stephen’s Green.

Aggrieved by some press reviews, notably in The Irish Times, he felt that his work would be better appreciated in London. He approached the Redfern Gallery there, but was told that he was not sufficiently well known for his work to be exhibited.

Furious, he resolved to write a book that would make him known “in every nook and cranny all over the world”. In the summer of 1951 he began work on The Ginger Man.

WATCH: JP Donleavy describes how he became interested in writing and got his first novel ‘The Ginger Man’ published https://t.co/4Byk2AD2d9