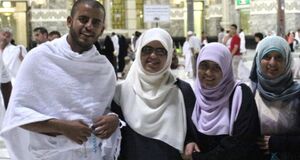 Ibrahim Halawa before his arrest with his sisters, from left: Fatima, Omaima and Somaia. 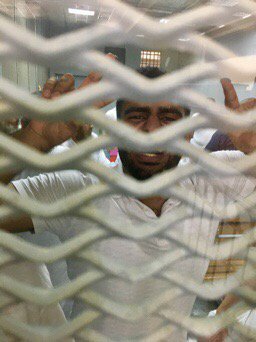 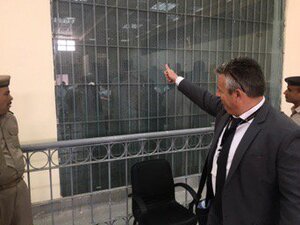 From top: Ibrahim Halawa moments after the verdict and Irish Consul at the Irish Embassy in Cairo Shane Gleeson (gesturing to Ibrahim)

Irish citizen Ibrahim Halawa and his three sisters have been acquitted of all charges by an anti-terrorism court outside Cairo.

Ibrahim Halawa, moments after his acquittal. He jumped with joy, hugged fellow prisoners and had tears in his eyes…

“We are delighted at today’s verdict. Our entire family are overjoyed at the result and we now look forward to seeing Ibrahim return home as soon as possible.

We would like to extend our thanks to all those who tirelessly campaigned and fought for Ibrahim’s release.”

We now look forward to seeing Ibrahim return home to his family in the coming days, and will be actively engaging with the Irish and Egyptian Government to ensure that happens without any further delay.”

“As President of Ireland I welcome the news that Ibrahim Halawa and his three sisters have today been acquitted of all charges brought against him, and them, in what has been a prolonged, distressing and draining experience.

Today’s decision brings to an end a long ordeal that Ibrahim, his family, friends and legal team have been put through.

I am sure Ibrahim’s family are looking forward to the moment that Ibrahim will return to his home and loved ones.

I am sure they will have been sustained by the support of all those who have campaigned for his release over the last four years.

It is appropriate, also, to acknowledge at this time the important efforts of the Department of Foreign Affairs and Trade and the staff at Ireland’s embassy in Cairo.”