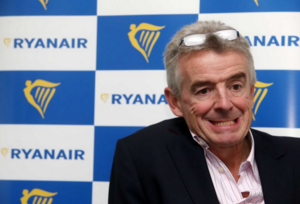 Ryanair has lost as much as €2.1 billion of its market value since the middle of last week, as the carrier’s move to scrap thousands thousands of flights over the next six weeks added to the impact of news on Thursday of a potentially costly European court ruling.

Shares in the low-cost airline fell as much as 4.8 per cent on Monday to €16.25, their lowest level since May, bringing its losses since markets closed on Wednesday to 9.9 per cent.

Ryanair moved on Friday to say it will operate a programme of flight cancellations over the next six weeks because of pilot shortage difficulties.

…The Commission for Aviation Regulation is meeting Monday to discuss Ryanair’s decision.

Norwegian Air: “We can confirm that 140 pilots have joined us from Ryanair this year. Pilot recruitment is also underway for more pilots…”

We want what he’s smoking.

What Do Siemens Know?