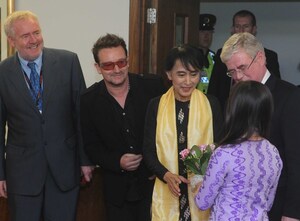 Further to reports that more than 420,000 Rohingya Muslims have fled violent attacks by Buddhists in Myanmar.

We are into the second week of this but finally a European leader has called this for what it is [French President Emmanuel Macron has said attacks on Myanmar’s Rohingya minority amounted to “genocide].

it is now time to rescind Aung San Suu Kyi of ALL the honours she picked up on her Bono-led tour of Ireland We cannot and should not honour apologists for genocide.

She Is Among us

When Love Comes To Town