Aung San Suu Kyi (second right)  is greeted at Dublin Airport in 2010 after her release from house arrest in Myanmar with then Tanaiste and Minister for Foreign Affairs Eamon Gilmore (right), and from left: Bill Shipley, of Amnesty Internatonal, and U2’s Bono

In 2017, critics called for her Ms Suu Kyi’s Nobel prize to be revoked, citing her silence over the persecution of Rohingya people.

All authority has been given to the top army commander and a one-year state of emergency has been declared, a statement on military TV said.

She urged her supporters “not to accept this” and “protest against the coup”.

In a letter written in preparation for her impending detention, she said the military’s actions put the country back under dictatorship. Suu Kyi’s argument: 1) The situation is one of armed conflict 2) It’s not genocide 3) If war crimes were committed, then they will be prosecuted in Myanmar, let us handle accountability at home 4) Forget the Fact Finding Mission, the Commission of Enquiry is credible. #Rohingya

Suu Kyi tells the ICJ judges: “Hate narratives are not confined to hate speech. Language that contributes to extreme polarization contributes to hate narratives.” Here she is referring, in not so many words, to documentation and allegations of genocide by rights groups and others

Myanmar’s Aung San Suu Kyi begins to give evidence at the UN’s International Court of Justice in the Peace Palace, The Hague.

Earlier, supporters of Aung San Suu Kyi gathered outside the court ahead of her arrival for a hearing into allegations that a military campaign by Myanmar against the Rohingya Muslim minority amounted to genocide. 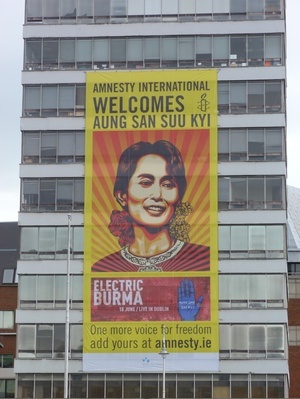 Amnesty International has withdrawn its Ambassador of Conscience Award from Aung San Suu Kyi “in light of her shameful betrayal of the values she once stood for”.

Last year, Dublin City Council stripped the Myanmar leader of her Freedom the City of Dublin award following her indifference to the persecution of her country’s Rohingya people.

Half way through her term in office, and eight years after her release from house arrest, Naidoo expressed the organisation’s disappointment that she had not used her political and moral authority to safeguard human rights, justice or equality in Myanmar, citing her apparent indifference to atrocities committed by the Myanmar military and increasing intolerance of freedom of expression.

….When she was finally able to accept the award at an event held in Dublin in 2012, Aung San Suu Kyi asked Amnesty International to “not take either your eyes or your mind off us and help us to be the country where hope and history merges.”

“When we honoured Aung San Suu Kyi here in Dublin, it was for a Myanmar that would protect and defend the human rights of all. This is what Irish people in their tens of thousands had campaigned for decades to achieve.

We will continue to fight for justice and human rights in Myanmar – with or without her support.

Amnesty International took Aung San Suu Kyi’s request that day very seriously, which is why we will never look away from human rights violations in Myanmar.” Bob Geldof receiving the freedom of the city of Dublin at a ceremony at the Mansion House in March , 2006; Aung San Suu Kyi pictured with a portrait gift presented to her at an Amnesty International event in her honour at Grand Canal Square in Dublin, 20012 Further to reports that more than 420,000 Rohingya Muslims have fled violent attacks by Buddhists in Myanmar.

We are into the second week of this but finally a European leader has called this for what it is [French President Emmanuel Macron has said attacks on Myanmar’s Rohingya minority amounted to “genocide].

it is now time to rescind Aung San Suu Kyi of ALL the honours she picked up on her Bono-led tour of Ireland We cannot and should not honour apologists for genocide. Aung San Suu Kyi (and her son, Kim Aris, this pic far left), welcomed to Aras an Uachtaráin by President Squee and Sabina within the last 30 minutes. Colm O’Gorman, chief executive of Amnesty International (right) with Andrew Montague, Lord Mayor of Dublin, and a bemused passer-by at the launch earlier of a 20-metre banner welcoming Burmese democracy leader Aung San Suu Kyi ahead of her arrival in Dublin on June 18.