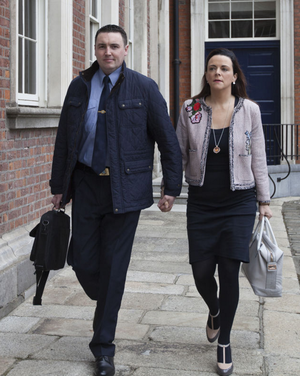 The Disclosures Tribunal resumed on Monday in Dublin Castle.

This section of the tribunal does not pertain to Sgt Maurice McCabe but, instead, to Garda Keith Harrison.

Readers will recall how Garda Harrison, who was previously stationed in Athlone, claims he first raised his suspicions that a garda was involved in the distribution of drugs in Athlone in November 2008 but that nothing happened on foot of making his suspicions known.

Garda Harrison later arrested this same garda for drink-driving in June 2009 and claims his working life has been made difficult ever since.

This section of the tribunal is expected to run until around October 3.

Specifically, Supreme Court judge Peter Charleton, who is overseeing the proceedings, is currently tasked with investigating the tribunal’s term of reference ’n’ – which is “to investigate contacts between members of An Garda Siochana and TUSLA in relation to Garda Keith Harrison”.

This arises out of a visit made by social worker Donna McTeague to Garda Harrison and his partner’s home in Donegal in which Ms McTeague spoke with the children in the home in early 2014.

According to the tribunal’s opening statement, Garda Harrision and his partner claim that this visit had “profound effects” on them both.