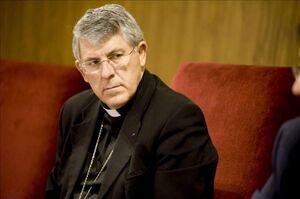 “The majority of cases of domestic violence happen because the woman’s partner does not accept them, or rejects them for not accepting their demands…Or often the macho reaction comes about because she asked for a separation.”

A Catholic Bishop has lectured women that they are to blame for the domestic violence they encounter because they are not being obedient enough to their husbands.

Laying to one side the natural predisposition to roll ones eyes like an out of control slot machine at the thought of a single man sworn to celibacy advising married women on how to conduct themselves….

You really have to laugh at this message which boils down to: Women, you have been doing marriage all wrong according to this unmarried man. You should understand that your disobedience in a marriage is giving your husband just cause to abuse you. So, you know, you should stop that right now.

Then the laughing stops…

The Bishop also does a huge disservice to men by effectively whitewashing them out of his statement. After all, there is no domestic violence committed against men if all men are being forced into doing the abuse by their willful and inconsiderate wives.

In the last European wide study conducted in 2014, 1 in 3 women reported experiencing physical or sexual abuse since the age of 15.

There is no corresponding study for males. It is unclear why this is. I sincerely hope it is not because the researchers prefer the narrative of women as victims and men as criminals.

However, there are reported domestic violence stats available for each country from 2015-2016 with the female to male ratio of victims:

The Irish stats are not bulletproof as the Gardai do not classify domestic violence as a crime type which is hardly helpful to policy makers trying to legislate for measures to combat it.

This writing of male victims out of the story of domestic violence is dangerous and ignorant. It means that there is no training for officers in how to deal with men who are attacked by their partners. It means there is no provision of shelter space for men who want to leave the place where they are in danger.

It means that helpline services like Amen are not funded from the public purse but have to rely on donations instead.

It means there is no provision of shelter space for men who want to leave the place where they are in danger. It means that helpline services like Amen are not funded from the public purse but have to rely on donations instead.

133 thoughts on “Accepting Their Demands”