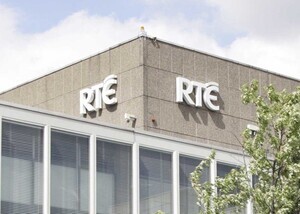 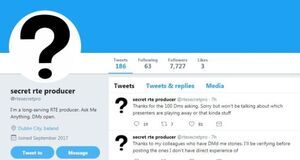 On the one hand, I’m with RTÉ in taking issue with the motives of the @RTESecretpro twitter account. But disloyal to staff?

Just a brief intro to this twitterer; they are claiming to be an RTE Producer with a load of juicy durt, and so far there’s plenty of whinging about no promotion, ould’useless department heads, no innovation, and shyte studio & technical crews that are run by Unions.

It’s that last bit that’s worth a mention here on its own btw; the unions have a director collecting a top-up on the RTÉ board, Aengus Mac Grianna currently as far as I remember, yet he’s not a camera man.

Ara tis just really a load of sad attention seeking, miserable moaning and tell-tale’ing.
If even what they report about the sloppy time keeping, the taxis, the coffee breaks, the studio crews overtime and work practices was of a genuine concern; then report it to the Comptroller Auditor General. The Licence Payer is entitled to value-for-money; at the very least.

But what we, the Community-At-Large that is, are all entitled to is the Truth and The Facts. REPORT THE FÚPPING NEWS! Tell the Truth.

@RTESecretPro isn’t any more superior than that commissioning editor that doesn’t tell people when they are back to work on their out-of-office automated reply or the one that cancelled Podge n’Rodge for Craig Doyle.

She, I’m saying it’s a she because it’s my own original hunch, so I’m sticking with she regardless of some of the names being touted. She is just as lazy and uninspiring as anyone one she is cribbing about in those tweets.

Everything she posts about RTÉ Sport, Entertainment and Children’s telly and the state of the Late Late production and the Unions is stuff we all already know.

This all makes me look at the roll of ting’foil in the press and put it to better use; is @RTESecretPro really an RTE Producer?

Has management put together a frape room of their own? To try an’ shift the unions and the work practices out the door? To get rid of the embedded analogue age department heads & commissioning editors that won’t work outside the original Live@3 and Going Strong formats.

Maybe tis some poor oul’divil that got dumped by Craig Doyle. Maybe it’s all a Ballymount Road lark? (Ha! Bodger is rubbing off on me!)

One of the most telling series of tweets, starting at 08.58 15th September last;

Someone asked me if I think the licence fee is worth it. and why. My answer is yes it is, but a lot of it is being waster.

Why is it worth  it? First independent investigative journalism – He who cannot be named owns every media outlet worth talking about. Apart from RTÉ We need someone to report the news that isn’t owned by a billionaire.

Secondly, Irish output – TV  proper investigative journalism etc. Not their fault – they are dirven only by market forces. Licence fee means RTE can do that which make no kids, comedy, irish language, isn’t driven by profit. RTE just need to do a better job of it.

The most laughable thing is that RTÉ are not Independent and they are patently not free from bias, just look at who they use to stock the talk show slots; stock rotation by way of convenience and familiarity and not by sell-by-date. RTÉ News & current affairs is powered with stories where Conflict of Interest lie alongside a cosy relationship.

RTÉ already filters the news and are selectively choosy about the stories they are prepared to investigate, they follow the Government Messengers and MSM PR & Advertisers preference on what they will spin and who they will have into their studios. Even how they moderate debates.

RTÉ produce, commission and break stories that suit similar protected and well-paid entities to themselves, like say, the HSE who must have been delighted with the Creches and Nursing & Care Homes Investigations.

I’ll admit to engaging her a bit, most notably on referring her to the RTE Whistleblowing Policy and to speak up.

Predictably the reaction was typically look how that worked out for Maurice McCabe. Look to Maurice McCabe now you tribe of fatted self-serving un-talented cowards.

It took real independent Journalism to keep the public fully informed. Not RTÉ, and it took a whistleblower with gumption and integrity and the will to defend the best interests of all of us to achieve the truth.

Go public if you really have something the public need to know, otherwise form a WhatsApp group with the rest of the uselsess in your job and keep the internal bitching about getting shafted and overlooked t’yerselves.

I am minded to pick a bone with her on a matter that would suggest my own bias; her cribbing about the GAA giving away some of the Broadcast rights.

My dear, RTÉ were making a hames of so many matches for years; the very least the GAA Community were entitled to expect is yere Colour Commentary Man getting the names of the Captains right. He’s still making mistakes btw and he’s still there.

I’ll close off by saying that as far as I’m concerned anyone engaged by RTE should the last source of a “He who cannot be named” remark and to claim they are an Institution of “Independent Investigative Journalism” is an insult.