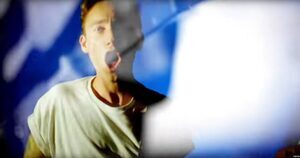 Just ‘dropped’ by Glenn Rosborough, a singer songwriter from Derry,

“I started my musical life from a very early age, teaching myself guitar at the age of ten and writing songs from the year after. Growing up in a musical household, with childhood heroes such as Tom Waits, Kate Bush and Peter Gabriel, becoming a musician was not a destined path but as realistic a career as becoming a lawyer, plumber or doctor. My parents made sure of that.”

Boys On A Friday

We Fade To Gay