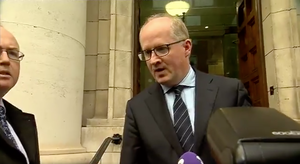 Further to talks between the Minister for Finance Paschal Donohoe and the governor of the Central Bank Philip Lane.

“So the current situation is we have 13,000 cases. Already, €160million has been paid out. We think the vast majority of those cases will be paid out before Christmas.

“However, we continue to make, to press the banks to expand their coverage, to make sure all of those affected are included in their schemes.

“That is the current focus of our work: is to make sure, beyond those 13,000 which, you know, those are in progress, is to make sure yet more are included. So that all of those affected will receive redress and compensation from their banks.

“Our focus is on our work now which is fully committed to protecting consumers. This examination was launched by us to make sure that all of those affected will receive redress and compensation for the harm that they’ve suffered.

“So, right now, we’re fully engaged with our consumer protection mandate which is at the heart of our current work.

“So, already we’ve seen over €160million paid out and that’s only in relation to a fraction of the cases. We are not going to put any limit on the amount paid out.

At 1.11 in the clip above, one male journalist asked Mr Lane: “Do you have enough powers, do you think?”

But Mr Lane moved to another journalist without answering that specific question.

The CEOs for KBC and Bank of Ireland have told RTE News that they will be making a statement shortly.