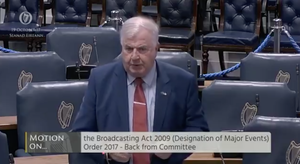 Oireachtas TV footage of Senator Terry Leyden explaining why he’s not “an advocate” of women playing rugby, as it’s a “physical” sport. pic.twitter.com/sGKk8lAdWE

Women should be mindful about endangering their “health and wellbeing” by playing rugby, a Fianna Fáil senator has said.

Terry Leyden claimed that research he read “somewhere” had shown that the sport was not recommended for young women. “I am not a doctor, but it’s very rough,” he said. “It is a bit more physical than soccer or gaelic football. There are inherent risks in too physical sports . . . I’m just saying, be careful. I don’t want to see anyone endangering their health and wellbeing.”

He made the comments to Denis Naughten, the communications minister, in the Seanad last week in a discussion on the move to broadcast Ladies’ All-Ireland football, camogie finals, and Six Nations championships free to air.

…He refused to indicate where the research he cited could be found other than “on Google”, and The Times was unable to locate any medical research resembling what he claimed.

I regret the offence caused to Women’s rugby by my recent comments. I have been contacted by a number of people regarding the participation of Women in Rugby and realise that my point of view was ill informed.

….I fully support all players and this week, players both male and female across Ireland and the UK are wearing wristbands that read ‘LEGACY‘, calling into question the legacy the IRFU want to leave women’s rugby with, just after hosting the World Cup.