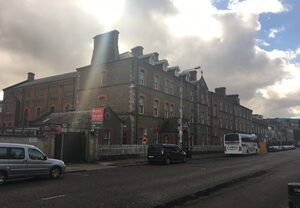 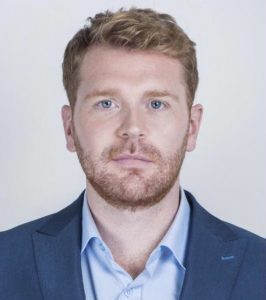 The building that was once known to generations of Dubliners as ‘The Gloucester Street laundry’ ceased its operations on October 25th, 1996, with 40 women, the eldest of which was 79 at the time, remaining in residence for many years thereafter.

How one might describe the current condition of the building will depend upon the vantage point from which it is viewed.

If you are to witness the building from the Sean McDermott Street side, you will find an almost pleasant looking, red-bricked façade that is defined only by its own inertia.

The front facing windows, of which there are close to fifty, are never broken, you will find absolutely no graffiti on the walls and should you pass it, as many people do on their way to, or from O’Connell Street which is less than a quarter of a mile away, you will find nothing particularly noteworthy in the aesthetics of that side of the structure.

Pope John Paul II himself was driven past the Gloucester laundry along that very route in 1979 on his way to address over one million people in the Phoenix Park.

My mother, who was reared just around the corner on Foley Street in the heart of Monto, stood just across the road on that day, among thousands of other locals who gathered around Lourdes Church in expectation that Pope John Paul would visit the shrine of Matt Talbot.

My mother talks about that day with such fondness in her voice. She laughs as she tells me that she placed herself right alongside a large handcrafted banner that read: “John Paul, don’t forget to visit Matt”, and although the Popemobile apparently sped down Sean McDermott St ‘faster than any joyrider ever had’, she still cites proudly the feeling of spiritual empowerment that she felt on that day.

I’ve always loved that memory and the manner in which my ma tells it but it is only in very recent times that I have started to wonder about the faces that must have peered out of those many windows of the Gloucester Laundry at the time and how they must have felt if they were able to see the banner that my mother stood close to.

What I have always understood to be the back of this laundry has an altogether different aesthetic to that which exists at the front. If you are familiar with Railway Street, you will surely understand it to be one of the most visually depressing streets in the State.

If you view the laundry from Railway Street, you will see that the walls that were built in 1887 to shield those who resided inside stand over twenty feet tall.

These walls represent more than mere tools of incarceration, though they certainly served as them too; these walls were built by the Church as offensive weapons in a war for moral purity and placed very purposefully in the heart of Europe’s largest and by all accounts most prosperous red light districts. 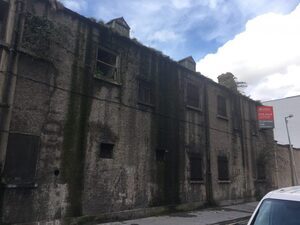 These walls are still there today and continue to cast a long shadow over the Inner City community that surrounds it. They are beyond any description that simply cites them as being grim or bleak. All of the windows that you can view from the back are broken.

Barbed wire adorns the tops of the structure and graffiti, of which includes a colourful representation of a scuba diver spray-painted by some talented randomer on to the jail-house like door that sits at the central base of the structure.

The scorch marks from the many stolen cars that have been burnt-out along the walls of the laundry extend almost to the height of the two crucifixes that stand at the top of the walls.

This is the location of my childhood nightmares. Around town, this is the place we knew our parent’s meant when our messing would annoy them enough to the point that they would warn us that ‘the nuns would come and get us’ if we didn’t start behaving better.

This is ground zero of the heroin epidemic that destroyed countless numbers of young working class lives since the early eighties. Open drug dealing still occurs at this location on a daily basis but of far more importance to me at this point, is that a conveyor belt of primarily working class young people will arrive here year after year to self-medicate for an inherited trauma that is as yet to be defined.

This is the location where just last week, a video went viral of some thug placing a firework into the hood of young woman whose screams in the face of such a terrifying experience, were the subject of an afternoon of radio show phone-ins. This is a place where cruelty feels comfortable.

This last operational Magdalene Laundry which closed its doors just  two decades ago today has recently been placed up for sale by Dublin City Council.

It is the only Magdalene laundry of its kind that is currently in the possession of the State. Rumours abound that a “business hostel” or a hotel of some description will in the coming years occupy the site and that the local community will somehow benefit from this in a manner that many of us have yet to accept as a worthy trade-off for what we stand to lose once the sell-off is completed.

This is the site that was recommended by Justice Quirke in May of 2013 as a location considered suitable for a memorial that would ‘honour and commemorate the Magdalene women past and present’.

This promised memorial has yet to materialise in any form but where there was once talk of a museum, or a beautiful garden, that may have began to go some way to providing the space needed to truly reflect on what occurred not only here but throughout the State; unelected officials of Dublin City Council now respond that it is they who will ensure ‘that there is a suitable memorial to the residents of this convent building as part of any futureredevelopment’.

Let’s just stop this fallacy now. As a people, we are defined not only by what we choose to commemorate but also by how we choose commemorate it.

Only a small number of us had relatives who where actually in the GPO on Easter 1916, or had the fortune of asking a member of the Black and Tans to ‘come out and fight them like a man’, but there are few families amongst us whose very recent lineage was not impacted by the mass institutional incarceration that occurred at this site, or in the nine other Magdalene laundries; or in the Mother and Baby homes; or in the Industrial Schools, the orphanages, the mental institutions, or what ever other description was used to describe an institution in our State that served to prohibit the liberties and profit from the forced servitude of those innumerable amounts of people that were deemed morally impure, sexually promiscuous, or too impoverished for inclusion in the acceptable face of Irish society.

A post nationalist narrative of Irish identity will be one that comes to terms with the collusion that existed between Church, State, and the Irish people and how the consequences of those choices that were made consciously, or otherwise by this trinity, are still being felt to this day.

To my mind, there is no more visceral representation of what the author and Justice For Magdalene’s campaigner James Smith referred to as Ireland’s ‘Architecture of Containment’ than the former laundry site that sits in the heart of Dublin’s Inner City and closed twenty two years ago today.

Mass incarceration and the abuse that occurred within these institutions be that physical, sexual or the forced exploitation of labour is the unspoken stain that exists on the conscience of Irish society. We are not alone in this regard and many nations with whom we share values have chosen to confront the darkest chapters in their own histories.

In Germany, the phrase ‘Vergangenheitsbewåltigung’ which translates as ‘coping with the past’ has become a key concept since unification and has manifested in the form of memorials such as ‘The Memorial to the Murdered Jews of Europe’ and the ‘Topography of Terror’, a museum built on the site of the former headquarters of the Gestapo and Nazi SS.

The importance of recognising tragedy has found further outlet in the recognition of the Cambodian genocide and the importance that the slaughter of My Lai currently holds in the collective memory of American veterans and the Vietnamese people.

The Irish people need a physical space where our future generations can touch the walls and understand that what happened here wasn’t exaggerated.

How else do we explain to our grandchildren that amongst many other deeds, that women in this country were for many decades after independence forced into religious controlled labour camps on the belief that they could cleanse themselves of some perceived immorality through constant labour, prayer and isolation. 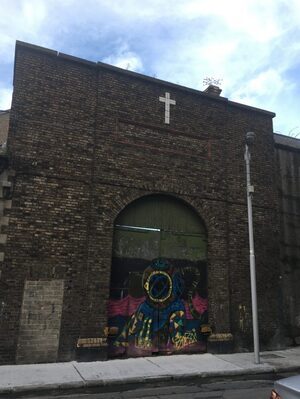 How can posterity fully comprehend that it was the State itself who awarded profitable contracts to these same religious institutions and at times when the innocent inmates sought to flee from their daily penance of scrubbing the washing of Mountjoy prison inmates or the large hotels who operated within its vicinity.

That the Sisters of Charity would ring-out the bells of the convent to notify the authorities and the local community that they had escaped from their bonds and seek assistance in returning the women to within the walls that we now seek to sell off.

We could create something truly meaningful at that location. That beautiful garden that was spoken of in 2013 by Justice Quirke would be nice to begin with, then perhaps even a centre of commemoration and remembrance to both the victims and the survivors of the Magdalene Laundry’s or the many other institutions of moral repression that existed throughout the State since our foundation.

In time, the sheer scale of that building would permit the opportunity for some form of social history museum to evolve naturally that could breathed new life into the local area in a way that another soulless hotel simply couldn’t.

We really aren’t ready sell off this former ‘Gloucester Laundry’ which currently has two faces, is situated in the heart of our nations capital and ceased its operations a mere twenty three years ago today.

At a very minimum we need to excavate the site first- among the many possible things we could find there is a better understanding of who we are.

The Papers Were On To Them Years Ago

No Wait, Come Back

31 thoughts on “The Last Laundry”