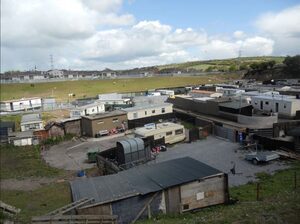 Blackpool village has been the historic gateway to Cork City. Once visitors from Dublin as well as Limerick would have entered here. It became famed in song and story. Many Cork City ballads have emanated from, or at least have referenced the place.

Planning changes in recent decades, which have included a shopping centre at the edge of the city, and the creation of an entirely new road infrastructure, have utterly altered the nature of the village. Dublin Hill, Commons Road and Watercourse Road all now interact differently with Blackpool.

Spring Lane has become particularly lost, ceasing to be a road to anywhere. On this road has existed two locations that have been intimately linked with Blackpool and its history. One a metal scrapyard, the other its human equivalent, in the form of a Traveller halting site.

This has been a traditional stopping point for travellers, from a time long before the foundation of the State. Although in its modern guise, the management of the facility by Cork City Council has been less than stellar.

The Council treats Spring Lane as a decommissioned site, where the intention is to move residents away from the area as soon possible. This being by 2020. As a result living conditions on the site are among the worst to be found in the country.

A war of attrition has been waged to pursue this policy goal. Louder voices among the settled community have driven the policy. Upgrading a traditional halting site has been the least pursued option.

Last week, with the visit of Storm Ophelia, for one young couple (both 21 years of age) with an 18 month old child living on the site, a bad situation became much, much worse.

Their caravan, being most exposed to the swirling gusts, was opened up like a sardine tin.

The response of the authorities to the plight of this family has not been particularly impressive. It has proved impossible to house the family together in temporary accommodation. This has seen the family live since then in the back of a transit van.

An argument can be made that unwillingly this family has become Ireland’s first climate change refugees. Unless we are able to change our immediate individual responses to extreme weather events, many others will follow their experience.

Despite the good general response of our emergency services to Storms Ophelia and Brian, it is the humanity of individual responses that should determine our success as a society in dealing with these events.

Budget 2018 spoke of the establishment of a ‘Rainy Day Fund’ of money put aside for unexpected occurrences. As a principle it should be applied more literally. The prime purpose of this fund should be to provide immediate individual relief during climate change emergencies.

Our challenge has become to limit the effects of the damage that will be caused. It is now more about this than in trying to prevent the damage from ever occuring. We are living the legacy of climate change, none more so than this afflicted family.

A family living in the back of a transit van, in this age, is totally unacceptable. Unless we are prepared to think and act differently, we may soon be dealing with a fleet of such families.

3 thoughts on “Spring Has Sprung”