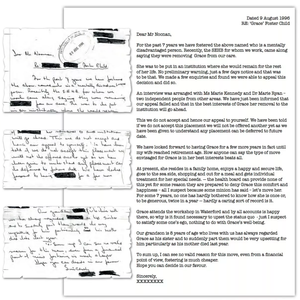 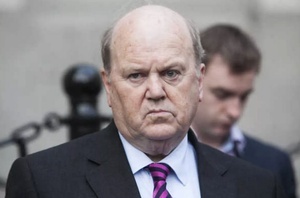 Last year’s Irish Examiner showing the letter sent by the foster father of Grace to the then Minister for Health Michael Noonan, above, in August 1996

Daniel McConnell reports on an interim report from the Commission of Investigation into the case of ‘Grace’, chaired by Marjorie Farrelly SC.

“Michael Noonan’s handling of the case of ‘Grace’ while health minister and the role of his department in the 1990s will be the subject of commission of investigation hearings early in the new year, an interim report states.”

“…Mr Noonan has strongly denied acting in any way on behalf of the foster father following written representations seeking to have ‘Grace’ remain at the home.”

Mr McConnell also reports that the interim report was given to Minister for Health Simon Harris and Minister of State for Disability Issues Finian McGrath yesterday and that it will be discussed by Cabinet next Tuesday.

Readers will recall how ‘Grace’ was born to a single mother in the southeast of Ireland in the late 1970s.

She was supposed to be put up for adoption but, instead, was put into foster care soon after her birth.

She was born with microcephaly and was mute.

The foster father – who was diagnosed with Parkinson’s in 1999 and who died in 2000 – was accused of sexually abusing another child in their care in 1996, at which point it was decided that no more children would be placed in their care and that Grace would be removed.

The foster parents appealed this decision to remove Grace and, in a letter dated August 9, 1996, to the then Health Minister Michael Noonan, the foster father stated that he and the foster mother lost this appeal and that they were appealing to the minister to “decide in their favour”.

On November 14, 1996, the foster parents were told Grace could stay with them.

Grace remained there for another 13 years.