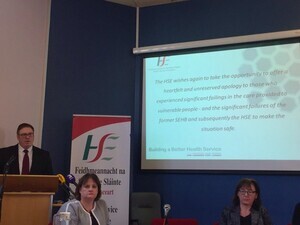 HSE officials holding a press conference in Kilkenny this morning

Following the seven-year efforts of social worker whistleblowers, the HSE is publishing two reports into serious failures at a foster home in Waterford.

A press conference on the matter is currently under way in Kilkenny.

The reports, the Conal Devine and the Resilience Ireland reports, were commissioned by the HSE and both looked at the services provided by this particular foster family – who had looked after 47 children intermittingly over a 20-year period, up to 2013.

One of these children was Grace, a non-verbal, intellectually disabled woman who is now in her 40s and who lived with the family for 20 years, until 2009.

The 148-page Conal Devine report was completed in 2012, while the 92-page Resilience Ireland report was finished in 2015. Copies of both reports were issued to service users and families of service users yesterday and some journalists have had sight of them.

The 2012 Conal Devine Report and the Resilience Ireland Report into the foster abuse scandal reveal Grace suffered significant physical injuries before being removed from the home in 2009. The two reports are due to be published today.

The injuries include black eyes, bruises to limbs, and carpet burns on her back, while she also suffered horrendous neglect in terms of her physical condition.

The Devine Report details how an original 1996 decision to remove Grace from the home, amid allegations of sexual abuse, was overturned following representations to the then health minister Michael Noonan.

It shows that a seperate allegation of “sexual molestation” against a second child in 1995 was not properly investigated because of the absence of a formal complaint to gardaí.

20 years of horror: Grace returned to foster home after hospital saw her for bruising on thighs and breasts (Daniel McConnell and Fiachra O Cionnaith, Irish Examiner) 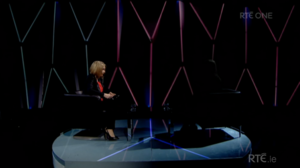 One of the social workers who blew the whistle on the Waterford home spoke to Claire Byrne last night.

Her identity was protected during the interview (above).

While speaking with Ms Byrne, the woman told how, after raising concerns with the HSE, the Department of Health, the Department of Children and Youth Affairs and the gardaí, she felt she had to go to the Public Accounts Committee – to highlight the wastage of taxpayers’ money – in an effort to get answers.

The move resembled that of Garda whistleblowers Sgt Maurice McCabe and former Garda John Wilson, who also approached the Public Accounts Committee – to highlight the loss of money for the State – when they were trying to highlight the quashing of penalty points.

Claire Byrne: “Grace is currently a client of yours and, before we begin, it’s important for me to ask: is she in a safe place now?”

Social worker: “She is.”

Byrne: “Allegations of sexual abuse, physical abuse and neglect. When did the extent of the allegations, regarding the foster care facility become known to you?”

Social worker: “It really started in 2009 that my colleague and I began to become aware of some concerns that we were, I suppose, unaware of, up to that point. But, really, over the last seven to eight years, we’ve become aware of more and more, a litany of failures I suppose to address these concerns, more concerns about different types of abuse, the number of people involved. And right up to today with the publication of these reports, it’s the first time that we’ve become fully aware of what was known to the health board and the HSE at various times.”

Byrne: “And it’s estimated that 40 individuals would have passed through this care home?”

Social worker: “Yes, what we know from today’s reports is that, in total, there were 47 children and vulnerable adults with disabilities, some of them for long-term placement, some of them for short-term respite care breaks.”

Byrne: “Now, when Grace was living at the home, the local authorities became aware of serious allegations by a previous resident and steps were taken, at that time, to remove the resident still living there, but Grace went on to live in that home for a further 13 years. Isn’t that the case?”

Byrne: “Now, seven years ago, you began a process of uncovering why Grace had remained in that care home, despite the complaints that had been made and the concerns that had been raised. You blew the whistle on what you believed had happened. To whom and which organisations did you speak to?”

Social worker: “We made a protected disclosure to the Department of Health, in the first instance, we then went to the Office of Protected Disclosures, within the HSE. At various times, I’ve been to the Office of Ombudsman, the Department of Children and Youth Affairs, several different departments within the HSE itself, right up to the very top echelons of the HSE. I’ve been to An Garda Siochana, we’ve had numerous inquiries, reviews and investigations out of those processes and, still, I suppose, in 2014, late 2014, I was in a position where I still didn’t know what had happened. I still had no answers… I hadn’t achieved anything other than endless inquiries, reviews, significant amount of taxpayers’ money – over half a million on inquiries at this stage, plus I would say, an equal amount on legal fees and management consultant fees. And so I decided to investigate the procurement processes in relation to those and that gave me, I suppose, a circuitous route to the Public Accounts Committee. And I was quite fortunate there that, upon meeting John McGuinness, and explaining to him my concerns around wastage of taxpayers’ money on unpublished reports, you know, answers we weren’t getting, learning that wasn’t happening, that we weren’t protecting vulnerable adults or learning from these failures. And John McGuinness, very quickly, took on board that there were more substantive issues, really than procurement. And it really is because of the work of the Public Accounts Committee that we are where we are today – waiting on a proposed Commission of Investigation.”

Byrne: “And where we are today, the HSE-commissioned reports, two of them will be published tomorrow [Tuesday]. Now there was one that was published back in 2012, that was the Conal Devine report. Another report was completed in 2015 by Resilience Ireland but neither report was published, as we know. They will be published tomorrow [Tuesday]. You have seen them, what do you make of the findings?”

Social worker: “While I was prepared for the lack of answers, we still don’t really know what happened. There seems to be, by and large, a failure to establish the facts, a failure to establish why certain things went wrong. We know that it went wrong, we just don’t know why yet. What I really wasn’t prepared for is the litany of failures. The word ‘failure’ it just seems to appear over and over again. Reading those reports today and seeing 47 individuals who were put at risk, there’s no other way around it. Their lives, these are people’s lives, they’re not just cases. They were put at risk. And I wasn’t prepared for how stark the reports would be in outlining 30 years of repeated failures. We know that the terms of reference for the Conal Devine report and the Resilience Ireland report were far too narrow to ever investigate what happened fully.”

Byrne: “Well, the Government has committed now to a Commission of Investigation into this foster home scandal and the minister in charge, Minister Finian McGrath will publish those terms of reference shortly. But what you’re saying is, the end result here, the one that you would hope for, is accountability in these cases?”

Social worker: “That has to happen. I think, at this stage, that, if the taxpayer sits back and doesn’t demand accountability on this, if they say, ‘well, I’m happy to pay for repeated inquiries and reviews and reports for a system that never holds anybody accountable’ – the same system, without any change, can’t affect different results in the future. That’s my concern. That, really, how can that system protect people if failures and a duty of care to the most vulnerable in our society – if we let that system become a risk to the very people it’s there to protect, how can that system ever protect vulnerable people?”

Byrne: “All of this, and given what you’ve just said. It must be hugely concerning for the families with those people with intellectual disabilities who are relying on the State to provide care facilities for them. I mean can we be sure that this isn’t happening now? Are the checks and balances in place now, do you believe?”

Social worker: “Oh I don’t think so. I think if I believed that, I wouldn’t be sitting here tonight, for a start. I wouldn’t have spent the last seven years, intend to spend the next couple of years working towards the Commission of Investigation’s findings to affect that kind of change. But, at the moment, I don’t think the system can adequately protect people. I think what we’ve seen, even around policy direction, what we have is people leaving foster care with an intellectual disability and there is no system for them to go into. They’re discharged from the care of Tusla. The HSE has a duty of care to them but doesn’t actually have a system of monitoring, vetting, oversight, training of the placements where they stay, if they’re in family-based placements. What we need is that for every child with a disability leaving foster care, if we learn anything from this, we need now for those placements to be regulated, for them to have oversight, to ensure that their needs are being met, to ensure if there are concerns, that action is taken and that there is a structure in place and that there is a system of regulation in place.”

Byrne: “Finally, we’ve heard an awful lot about whistleblowers and how they’re treated in this country. How was your experience, as a whistleblower?”

Social worker: “It’s been appalling. You know, it’s been a very difficult seven years and I think that, all through that, I was very lucky because I work for a very small agency that, when I came to that agency in 2009 – I was only a newly qualified social worker – this was actually the first case I ever had in disability social work. And, when I started raising those concerns, I had the support of the management team within the organisation I work, I had the support of the board of directors and the voluntary agency I work for. And that allowed me to go to all of the various departments I went to. To go to the Office of the Ombudsman, to go to the Public Accounts Committee. At no stage, did anybody – I suppose despite the impact that that had on a small agency – at no stage did anybody attempt to discourage me from that within the organisation.”

“The difficulties I faced within the HSE were significant and my concern is that for any other social worker now, who might be out there, who might know of another Grace today, that’s not a system that would entice anybody to make a protected disclosure, to blow the whistle on it.”

Byrne: “Thank you very much for your time.”