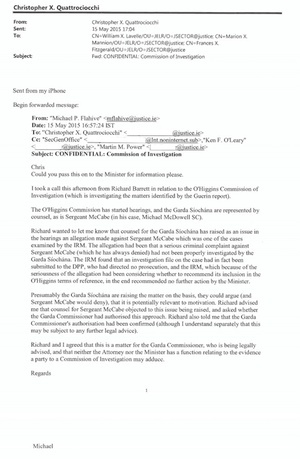 The full unabridged email that may bring down the current government.

Michael Flahive, of the Department of Justice, sent this to Tanaiste and former Minister for Justice Frances Fitzgerald’s private secretary Christopher Quattrociocchi on May 15, 2015, which was subsequently sent to her.

Ms Fitzgerald has said she can’t recall receiving the email.

In it, Mr Flahive says he received a call from Richard Barrett, of the Attorney General’s office, and that, according to Mr Barrett, a row had taken place at the O’Higgins Commission of Investigation between the legal counsel for Sgt Maurice McCabe and the former Garda Commissioner Noirin O’Sullivan.

Mr Flahive claims Mr Barrett told him the row occurred because the counsel for Ms O’Sullivan wanted to introduce a complaint that the 2006 investigation into Ms D’s ‘dry humping’ allegation against Sgt McCabe wasn’t investigated properly.

Readers should recall Ms Fitzgerald, in May 2015, received a lengthy report from GSOC in which it stated the 2006 investigation was carried out correctly.

That GSOC investigation followed a complaint made by Ms D, which was discussed at the Disclosures Tribunal when Irish Independent journalist Paul Williams gave evidence.

When Ms D gave a statement to GSOC, on July 3, 2014, Ms D told GSOC Mr Williams told her senior members of An Garda Siochana and Government were aware of her allegations.

When asked about this, Mr Williams said it was a “throwaway remark” that the then head of the Garda Press Office Supt Dave Taylor said to him and that he later relayed it to Ms D.

Related: ‘This Is About A Failure To Stand By Maurice McCabe’

Maurice McCabe And The Irish Sun