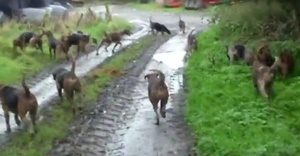 Farmer Norman Daniels of Tullaroan, County Kilkenny has suffered numerous incursions from hunts over the years. Hunts cause extensive damage to farm property nationwide and many landowners consider them a nuisance, and in some instances a grave threat, that they can ill afford

But this time (the incident happened over Christmas), Norman Daniels had a camcorder ready to record the type of hunt havoc landowners have to contend with on a weekly basis every season in Ireland.

As The Irish Council Against Bloodsports say on their facebook page: “This all demonstrates yet another good reason for hunting with hounds to be banned in Ireland.”

The Boos Of Mooncoin

The Lady In The Raft

30 thoughts on “The Hounds Of Hell”