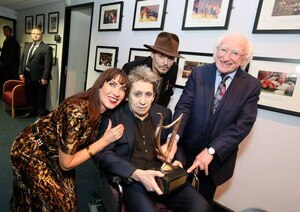 On the week that he celebrated his 60th birthday, Shane McGowan and his partner Victoria Mary Clarke join Ray to talk about Monday night’s celebrations at the National Concert Hall.

The ‘Kerry babies’ story shocked the nation in 1984 and is now dominating the headlines again. Mary O’Rourke will join Ray on the couch to discuss how the country rose up after her impassioned speech on the treatment of Joanne Hayes at the Kerry Babies Tribunal.

Actor Marcus Lamb caused a stir as Dr. Oakley in Fair City and he joins Ray with his Mum, Geraldine Plunkett, to talk about following in her footsteps, family ties and memories of the much loved series Glenroe.

David Norris will chat to Ray to talk about winning Celebrity Home of The Year, his 17 portraits and why he has written and recorded his own eulogy!

As well as all that Ray will be joined by the Liverpool fan from Cork, Richie Sheehy, who caught the attention of Noel Gallagher, Jamie Carragher and Robbie Fowler when he created one of the greatest Liverpool songs of all time.

31 thoughts on “Staying In Tomorrow?”