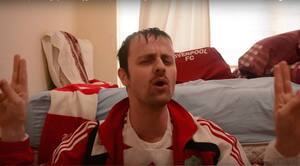 Johnny Keenan (him off the telly!) writes:

Kevin Murphy is Corks self-professed biggest Liverpool FC fan. He has written a little ditty from his own wild imagination and his own bedroom.

He did this last Tuesday and by yesterday (Thursday) he had over a million hits. He has done over 50 interviews and his dream is now looking like a reality,

The dream is to have ‘The Kop’ singing his song on Sunday as Liverpool attempt to take league leaders Man City down to earth with a good trashing.

The Anfield MC has already promised Kevin he will play it before kick off to inspire the players and encourage the fans.

Kevin is still looking for a ticket for the match on Sunday. He will be heading from Cork to Liverpool in hope that he can get onto The Kop and sing his song in unison with his brethren.

Calm down, calm down, softlad.

40 thoughts on “May God Have Mersey On His Soul”