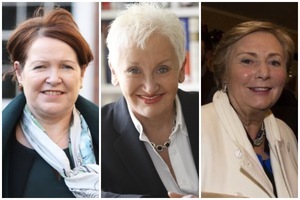 There was an  exchange between Patrick Marrinan SC, for the tribunal, and former Deputy Secretary of the Department of Justice and Equality Ken O’Leary, who retired last June.

It came after Mr Marrinan asked Mr O’Leary about the Department of Justice’s relationship with the Garda Commissioner.

It was in the context of the swirling of drafts – with the help of Terry Prone of the Communications Clinic – being sent back and forth between the then Garda Commissioner Noirin O’Sullivan and the then Minister for Justice Frances Fitzgerald, via Mr O’Leary, in May 2016 after reports emerged in the Irish Examiner and RTE about the O’Higgins Commission.

The drafts were in relation to pending public statements by Ms O’Sullivan and contributions to the Dáil by Ms Fitzgerald.

When Ms O’Sullivan gave evidence, it was put to her that it appeared she was drafting a statement for the minister – to be made in the Dáil – when she wrote an email, with a draft attached, and the message:

“I understand that you may have to make a statement this morning and I enclose a draft for your consideration.”

“I may have said a draft, I don’t mean a draft statement, it’s a draft insofar as here are pointers that you can choose to use or not.

But actually, and we probably will come to the email but they were the facts, the actual facts as opposed to the erroneous facts that were floating around the commentary at that time.“

The draft, or pointers, included the lines:

Ms Fitzgerald didn’t end up saying this in the Dail.

Returning to the exchange between Mr Marrinan and Mr O’Leary:

Patrick Marrinan: “I mean, a commentator might say that you know, that the Department was acting hand in glove with the Commissioner at the time?”

Ken O’Leary: “And so it was, for the very good reason that we had to take a public interest view in relation to all these matters and our view was that the public interest was not going to be served in any way by the Commissioner’s position being put in jeopardy at that time.”

Marrinan: “Yes. But you will appreciate that we are probably hearing about this relationship as it existed at the time between the Department and the Garda Commissioner for the first time, because it’s not evident and apparent to members of the public to know that there is this closeness and degree of closeness between the Garda Commissioner and Department — officials in the Department of Justice and indeed the Minister, do you understand?”

O’Leary: “And it wasn’t because of loyalty or whatever. It was because we took the view that there was no proper basis for questioning the Commissioner’s position. But there was a danger because of the political feverish climate going on at the time, if people had looked at previous things that had happened during the course of Garda controversies they could go anywhere.

And frankly, we also thought there was a danger that the Commissioner, given the way she was being pilloried in public and the very difficult position that was in, there was obviously a danger that a sensible person might say, look, I am not putting up with this any more.

And the implications for us of having to find a new Commissioner and the disruption that would have been caused, as I say our view of the public interest was that anything we could do to support the Commissioner, we would do, because we thought that was in the interests of the leadership of the Guards, and the public interest.

So as I say, it wasn’t all friends helping each other out; it was a clear view of where we thought the public interest lay. If –I mean, if the O’Higgins Commission report said the Commissioner inappropriately relied on strategies to do down Sergeant McCabe, well then we would have had to deal with that in an entirely different way.”

Marrinan: “Yes. So I mean, would it be fair to summarise your position in relation to this, that you may well have been hand in glove with the Commissioner in relation to this issue at the time, not because you had a cosy relationship but because the Department had taken a view arising out of the O’Higgins Commission that the Commissioner was in fact correct in her approach and there was no question that she was going to resign?”

O’Leary: “It’s not that we were taking a view the Commissioner was correct in what happened at the O’Higgins Commission, because we had absolutely no information except for one detail, we may be coming to.

What we were doing was relying on Judge O’Higgins’s report and there was nothing in that that questioned in any way the approach of the Garda Commissioner on our reading of it. The hand in glove phrase, do you know, if you don’t mind me saying so, it is a bit pejorative. Like, we were working closely with the Garda Commissioner in the situation which arose to achieve the objectives we thought were best in the public interest.”

Marrinan: “Yes. But so closely that you thought it appropriate and not out of order to send a draft letter to the Commissioner for her consideration to send back to the Department and also that the Garda Commissioner could contact the Minister directly with what, on the face of it, appears to be a draft speech expressing confidence in her?”

O’Leary: “In relation to, you know, what is called a draft letter, I have tried to explain the background to that, if it had been written, headed instead ‘points that you might take into account in the light of our discussions’, I don’t think anyone would find that objectionable and maybe that is what I should have done.”

O’Leary: “Well, I mean, frankly, like, that is a question of form rather than substance in relation to what was going on.”

Marrinan: “Well, I think if it had become — either the letter or the speech had become bestsellers, there might have been a quarrel in relation to copyright and royalties, but anyway.”

3 thoughts on “Hand In Glove”