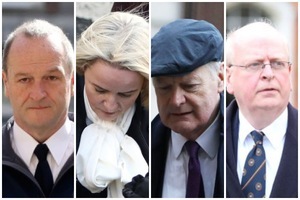 Supt Noel Cunningham is scheduled to give evidence.

Although Supt Cunningham is not waiving his client/lawyer legal privilege, it is hoped Supt Cunningham will be able to shed light on how and why several specific events occurred at the O’Higgins Commission of Investigation in 2015.

It’s also hoped Supt Cunningham may be able to help shed light on a matter that, to use a term used several times by various counsel at the tribunal, appears to have left solicitor at the Chief State Solicitor’s Office Annemarie Ryan and Michael McDowell SC, for Sgt Maurice McCabe, “diametrically opposed” to each other.

Specifically, Ms Ryan has given evidence to say that she gave Supt Cunningham’s report of an August 2008 meeting with Sgt Maurice McCabe in Mullingar to both the commission and Sgt McCabe’s counsel – namely Mr McDowell – on the morning of May 18, 2015.

This prompted Mr McDowell to have the following exchange with Judge Peter Charleton.

Charleton: “Maybe. But the evidence I have at the moment is that it was actually handed in with the letter —

McDowell: “I think, Judge, that if you check the transcript, the evidence is the contrary, that it wasn’t handed in that day.”

McDowell: “I know I am not always right, but on this I think I am right.”

Charleton: “You could well be, because you were there, but I think someone is going to have to tell me about that if it becomes important.”

Why does this matter?

Because Supt Cunningham’s report of this Mullingar meeting matched the transcript of Sgt McCabe’s tape recording of the same.

And yet, this fact came as a “total surprise” to Supt Cunningham’s legal team on June 25, 2015, as stated by Michael McNamee BL, for the former Garda Commissioner Noirin O’Sullivan.

Readers will recall how a legal row broke out at the commission on Friday, May 15, 2015, while retired Chief Supt Colm Rooney was giving evidence.

After the row – and after the legal team for then Garda Commissioner Noirin O’Sullivan, Supt Cunningham, Chief Supt Rooney and Supt Michael Clancy, among others said it was Ms O’Sullivan’s instructions to challenge the motivation of Sgt McCabe – Judge Kevin O’Higgins called on Ms O’Sullivan’s legal team to supply the commission and Sgt McCabe with a document outlining the claims that they intended to put to Sgt McCabe.

This letter, from the Chief State Solicitor’s office, was submitted to the commission’s chair and Sgt McCabe’s legal team on the morning of May 18, 2015.

This letter included an allegation of a blackmail-like scenario against Sgt McCabe in paragraph 19 of the letter.

Colm Smyth SC, for Ms O’Sullivan and other gardai, put this allegation to Sgt McCabe as he gave evidence on Monday, May 18, 2015 and Sgt McCabe said it was “absolutely false”.

Kathleen Leader BL, for the tribunal, previously said that while Supt Cunningham gave evidence on May 19, 2015, “an issue arose with regard to the circulation of documentation which led to Superintendent Cunningham not completing his evidence on that day”.

The tribunal hasn’t heard the details of that issue.

But on June 11, 2015, lengthy submissions were given to the commission and to Sgt McCabe’s legal team, on behalf of Ms O’Sullivan and the other gardai, and in one paragraph, the allegation of blackmail was repeated.

And, the submission claimed, evidence would be put forward to support this.

On June 25, 2015, when the commission resumed, Judge O’Higgins called into question this blackmail-like allegation as set out in the Chief State Solicitor’s letter of May 18, 2015.

This was because, in the intervening period of when the commission wasn’t sitting, Sgt McCabe had provided a secret tape recording of the meeting which proved that no such blackmail situation had unfolded at the meeting.

Colm Smyth SC, for the then Garda Commissioner and Supt Cunningham, told Judge O’Higgins that the tape recording “came up somewhat by surprise to us during the course of the examination by me of Superintendent Cunningham, I am going to have to take him through this transcript”.

Sean Gillane SC, for the commission, put the following to Supt Cunningham:

“I know you didn’t write this letter but again I infer from your evidence that in relation to paragraph 19 of the letter written by the Chief State Solicitor that has been referred to this morning, that following then is, I put no higher than this, the wrong end of the stick, in the course of this meeting Sergeant McCabe advised superintendent the only reason he made the complaint against Superintendent Clancy was to force him to allow Sergeant McCabe to have the full DPP directions conveyed to him. That just doesn’t appear to be right.”

Supt Cunningham then went on to point out that his report of the August 2008 meeting matched the contents of Sgt McCabe’s tape.

In a later statement to the Disclosures Tribunal, Mr Smyth attempted to explain why a false allegation had been put to Sgt McCabe at the commission. He said:

“A misunderstanding in instructions which came from clients other than Commissioner O’Sullivan resulted in an inaccuracy related to an interaction with Sergeant McCabe on 25th August 2008 in Mullingar Garda Station.”

And, as for the perceived so-called ‘to’ versus ‘against’ error in the CSS letter, Mr Smyth said:

“I can speak for myself in respect of this, I was left in no doubt about this; my clear perception was that this was “against” rather than “to” at the time.”

When asked if Mr Smyth saw Supt Cunningham’s report on the morning of May 18, 2015, Mr Smyth said: “I don’t recall seeing that document.”

When Michael McNamee BL, also for Ms O’Sullivan and Supt Cunningham, was asked if solicitor Annemarie Ryan gave Supt Cunningham’s report of the Mullingar meeting to him on the morning of May 18, 2015, Mr McNamee said: “No, sir, she didn’t.”

Mr McNamee also gave evidence about the submissions and said “they were approved before they were delivered”.

Readers will also recall how Diarmaid McGuinness SC, for the tribunal, has told the how Supt Cunningham made a statement to the tribunal explaining why he didn’t spot the mistake in the Chief State Solicitor’s letter.

“The position is that he [Supt Noel Cunningham] recites in his statement that he received the letter, he didn’t have an opportunity to print it, and read it from his phone, but he wasn’t able to read it from his own phone and he said he had bad eyesight and he said that he didn’t see the mistake in paragraph 19, and that, had he seen the error, it would have been clear to him.”

Readers may wish to note it was in this exchange Ms Ryan had with Ellen Gleeson BL, for Colm Smyth, that she claimed she gave Supt Cunningham’s report to the commission on the morning of May 18, 2015.

Ellen Gleeson: “Ms. Ryan, I think you indicated, Mr. McDowell asked you earlier to confirm that it was only when the record of the Mullingar meeting came to light that the error in the letter of the 18th of May was revealed?”

Annemarie Ryan: “That is correct.”

Gleeson: “But in fact, I think you had handed in to the Commission and I think also to Sergeant McCabe’s team, as I understand it, Noel Cunningham’s report of the September 2008 with the letter of the 18th May, you had made that available, I think you said earlier in your evidence on day 42, at page 140, that you had handed in those enclosures, including that report on that date?”

Ryan: “Yes. The 18th May 2015, I recall Mr O’Hagan [solicitor for the commission] wanted the letter immediately and, as I said, I was late for other reasons getting over there, out of my control, and I gave the letter over, I was then copying the documentation, there was three documents and they followed within a couple of minutes, and the hearings commenced and I do recall a part — and then a copy of it I was directed to give it to Maurice McCabe’s legal team. My notes show I gave over three copies and with the letter, with the documentation and no other party received that letter or documentation.”

Gleeson: “Thank you. And the September 2008 letter, of course, referred to the complaint being to Superintendent Clancy, isn’t that right?”

Gleeson: “And would you agree, therefore, that the September 2008 report, which revealed that mistake in relation to the complaint against Clancy, was made available to everyone by your clients before the transcript of the Mullingar meeting was provided by Sergeant McCabe?”

#DisclosuresTribunal NC says he gave report to Commission and McCabe’s legal team on May 18 2015. McDowell repeats this did not happen. Charleton suggest sometimes, even in the High Court, “sometimes paper comes in like confetti”. NC says “There were documents flying, judge”

#DisclosuresTribunal McDowell calls up transcript of day 4 of O’Higgins (May 19, 2015)..showing McDowell DIDN’T have NC’s report of Mullingar meeting on May 19. Annemarie Ryan, of Chief State Solicitor’s office, previously told tribunal this WAS given to McCabe counsel on May 18

#DisclosuresTribunal Charleton says this “wouldn’t be the first time something like that happened” and says he could recall Ms Ryan’s evidence stating she was late to the Comm on the morning of May 18. Charleton says: “It happens”

#DisclosuresTribunal Before Supt Cunnigham finishes giving evidence, McDowell, returns to Day 4 of the O’Higgins transcript. In the transcript Gillane SC, for the O’Higgins Comm, said “Judge in relation to the current position and circulation of some documents there…”

#DisclosuresTribunal “…I think it might be appropriate to stand this witness down just for the present purposes and we’ll have [him] recalled hopefully later today.” McDowell tells tribunal the witness being referred to was Supt Cunningham and he was being stood down because..

#DisclosuresTribunal ..NC’s report of Mullingar meeting had NOT been circulated to McCabe’s counsel at that point (May 19, 2015). McDowell said they did not get it later that day. He couldn’t state when he received it but it was some time after.

#DisclosuresTribunal McDowell repeats the matter wasn’t sorted out until late June (when the Comm resumed and after McCabe’s tape was produced) and that this took place AFTER the submissions (which repeated wrong claims of CSS letter) were entered on June 11, 2015.

“Drafted By Counsel, Circulated And Signed Off By The Client”