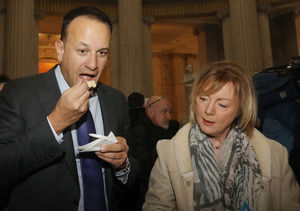 Taoiseach Leo Varadkar and Minister for Employment Affairs and Social Protection Regina Doherty at the launch of the Government’s Self Employed Benefits Awareness Campaign in City Hall yesterday.

To much fanfare, the Taoiseach and the Social Welfare Minister launched a ‘Self Employment Benefits Awareness’ campaign this week.

Maybe you’re new into the workforce and you don’t know any better, maybe you’ve been around for a while and you know that this job you used to do as an employee is no different to the job you are now are forced to do as self employed, but damned if you know how your employer is getting away with it. .

Bogus self employed workers lose holiday pay, sick pay, maternity pay, workplace protections, including the right to join a union; face an increased tax burden; receive no overtime pay; and may have no recourse for workplace injury violations and disability-related disputes.

The loss of all these rights, your rights as an employee, results in a labour cost saving to your rogue employer of about 30%.

Bogus self employment has become a no brainer for employers. Ireland is the only country in Europe where an employer can register a worker as self employed without the consent, involvement or knowledge of the worker.

There have been no widespread investigations into bogus self employment since 2001. Once in a while, Revenue inspectors will arrive on a building site and pick off a few of the lowest hanging fruits to placate the odd journalist who asks questions, otherwise, it’s a bogus self employment free for all with the full consent and backing of the government through various ‘special tax arrangements’ like the eRCT and the Courier Agreement.

Bogus self employment doesn’t just steal from workers, it is stealing massive amounts from the state too. In 2017, 75,000 construction workers were registered as self-employed out of a total workforce of 130,000.

Rogue employers are now demanding that groups of workers set up companies to filter their wages through so that employers can evade PRSI. These come under the ‘self employed with employees’ category, nobody is even looking at the area for bogus self employment but it is happening and on an ever increasing scale.

Between the years of 2008 and 2014 there was a combined total of 500,000 construction workers registered as self-employed. The total tax take in those years from those workers was minus 90 million!

YES – (minus) 90,000,000 euro from 500,000 self-employed contract situations over 6 years. 500,000 employment contracts situations would have netted the exchequer somewhere around 2 billion for the same period.

Now here’s the really astounding thing, these ‘Special Tax Arrangements’ like the eRCT and the Courier Agreement were not established to actually collect revenue, they were established to bring workers, who had traditionally been working in the Black Economy, into the tax net.

All concerned recognise that it is far from being an ideal system and that there is room for improvement.

The government has agreed to turn a blind eye to bogus self employment because that’s the price they are willing to pay to reduce the numbers on the unemployment register.

For those outside the construction sector, there has never been any wide or even narrow scale investigations. Don’t bother trying to challenge you employment status, it can take up to 3 years, cost you  10s of thoudands in in legal fees and the fix is already in before you start. Instead, Leo and Regina will make you pay more PRSI for very very limited benefits.

You are truly lost in self employment.

31 thoughts on “Having Our Cake”