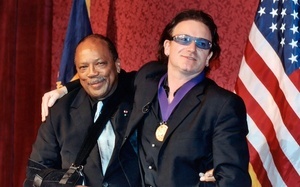 Quincy Jones and Bono in Dublin in 2002

Vulture: “Is Hollywood as bad with race as the rest of the country? I know that when you started scoring films, you’d hear producers say things like they didn’t want a “bluesy” score, which was clearly code-speak. Are you still encountering that kind of racism?”

Quincy Jones: “It’s still fucked up. 1964, when I was in Vegas, there were places I wasn’t supposed to go because I was black, but Frank [Sinatra] fixed that for me. It takes individual efforts like that to change things.

It takes white people to say to other white people, ‘Do you really want to live as a racist? Is that really what you believe?’

But every place is different. When I go to Dublin, Bono makes me stay at his castle because Ireland is so racist. Bono’s my brother, man. He named his son after me.”

We Get To Carry Each Other