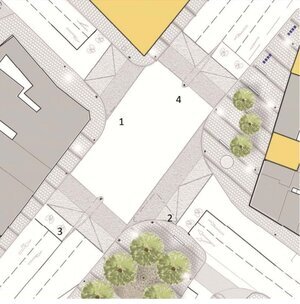 Dublin City Council are proposing new public realm scheme at Dolphin’s Barn without providing for cycling for all ages as promised in the City Development Plan.

The project follows the trend set by public realm upgrades in recent years in Kilmainham and Rialto which have been problematic for cycling, with complaints from residents and people who commute to or via those areas.

The project in Dolphin’s Barn is to cover the main streets of Dolphin’s Barn — South Circular Road going east-west and Dolphin’s Barn north-south (leading to Crumlin Road to the south and Cork Street to the north). It is due to go to public consultation in the near future.

The plan includes raised pedestrian crossings and the removal of a slip turn, but no cycling infrastructure suitable for all ages. Short and narrow sections of cycle lanes would be repainted into the new scheme.

Council official David Healy told councillors [at the South Central Area Committee on Wednesday 17 of January] that: “In terms of the cycle lanes, the problem that we have is that we have fairly limited road space and we have not transformed it too much because we’re slightly hamstrung, we can’t make it any wider.

Desktop estimates of the street widths, estimated by IrishCycle.com (see below), shows that cycle paths can fit along side wide footpaths, bus lanes and single traffic lanes in both directions. 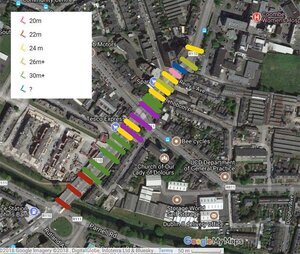 ….Examples [below] of what can fit in the two smaller widths — these are purely examples to show that — roughly — that cycle paths can fit along side wide footpaths, bus lanes and single traffic lanes in both direction.

Besides a very small area where the width goes down to 20 metres, the notable narrowest section is 22 metres wide.

However the workable width along most of the scheme is at 24 metres or wider — much of the widths are 26-30 metres or more, allowing easily for seating, tables and chairs, greenery, bus stop bypasses etc…