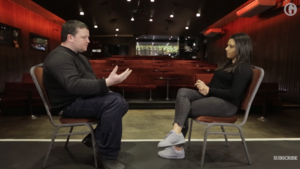 “I finally want to make the film about Travellers in this country, made by a Traveller, if I can get funding for that, but I suppose I’ll make it anyway somehow. I think once you decide to do it, you decide to do it and you make people believe you’re going to do it – then it’ll happen.

‘I have a spotlight. People listen to me.’ John Connors on his controversial award speech (The Guardian)