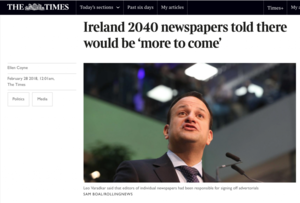 And journalists being directed to make advertorial look like news…

Ellen Coyne reports today that some newspapers were told – by the media agency hired by Taoiseach Leo Varadkar’s Strategic Communications Unit, Mediaforce Ireland – that “if they did a good job writing positive editorial copy about Ireland 2040, they would be paid to write similar content on Brexit”.

It follows Ms Coyne, reporting on Monday, that:

One local editor told The Times: “This is fake news. Newspapers are struggling and the government know that, so they’ve got us by the balls.”

Correspondence between Mediaforce and newspaper editors said that part of its “deal” with the government was that copy would not include a label similar to advertorial and that the sponsored content should look like editorial.

Editors were advised that the reason Mediaforce had been able to secure the Ireland 2040 campaign was because it would ensure that copy would match the “tone” of the newspapers it was running in. Journalists were told to give government copy a local angle and if they did a good job, there would be “more to come” on Brexit.

The SCU claimed it did not direct newspapers to blur the lines between editorial and advertisements. Mediaforce has not responded to requests for comment. The articles were marked as “in partnership” with Ireland 2040 or as “special reports” but more accurate terms such as “commercial feature” or “advertorial” were not used.

Ireland 2040 newspapers told there would be ‘more to come’ (Ellen Coyne, The Times Ireland edition) 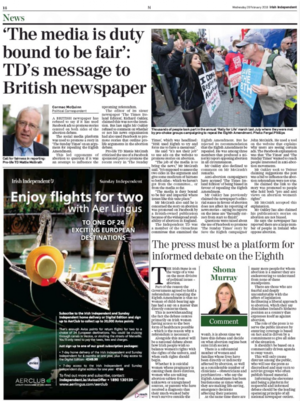 ‘The media is duty bound to be fair’: TD’s message to British newspaper (Irish Independent) 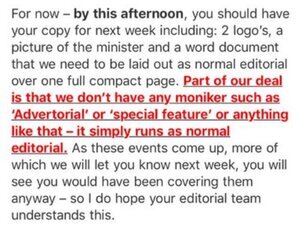 Before You Make Up Your Mind

1 thought on “More Where That Came From”