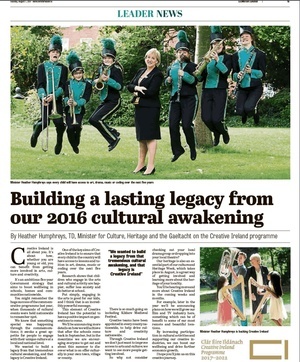 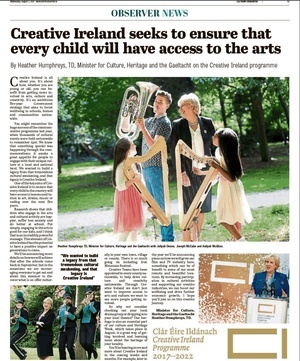 Advertorials in the news pages of The Leitirim Observer (above) and The Leinster Leader (top).

For any Journalist to support a line of thought that is not their own is a fraud. They risk our democracy, and the citizen is their victim.

I said that the last time I was here although I’m not sure anyone recognised how actually useful it is to breath it in an’ out – for any Journalist to support a line of thought that is not their own is a fraud – every so often.

The story of the week running alongside the National Bread Alert has been the Campaign for Leo Unit and their advertorials.

I’ve no problem with the nonsense that comes out of this well stocked Unit btw. But I am very uncomfortable with this arrangement for pretend’ie reporting from an industry that is known for demanding ‘freedpm of the press’.

This well-funded unit, by offering payment to get these promos presented as actual news and given news desk treatment and oversight creates collusion. And any publication that followed the instructions and conditions of accepting the Advertorial from the Campaign for Leo Strategic Unit FOR MONEY has in fact got themselves co-opted into the Campaign for Leo.

I don’t care how many departments, tenders and external providers come between Leo Varadkar, Fine Gael, The SCU etc and these newspapers. R€ward was offered, and they ate it up.

The fact is money controls the truth in this country, and shur’ we all know it, and I’m sick of always seeing it, but tis’ this Advertorial dressed up as legitimate reporting thing that has tipped me over past boiling.

Over the last few weeks we’ve all now established that this Strategic Communications Unit set out a marketing campaign that was designed to look like news.

I’m not sure they realise the damage they are capable of doing; designing ads to look like real hard news and co-opting journalists to endorse it as their own. What happened to wanting to report truth facts and news. In other words, we are being played by Marketing & PR people who have already bought out the press.

In equal disgust is Fianna Fáil, I am certain that they get the benefit of the Communications Unit too. The Campaign for Leo Dept strikes me as having all lot prominence and access to the Government, and in particular the Taoiseach.

So, we may have to accept this Unit as establishment from now on. In which case, since they have already bought out some members of the press with advertising Income, who are the remaining unbiased and Independent voices left; besides me own like.

That Beast from the East saved the Fine Fáil joint venture (aka shared arse) this week. But it also saved the Irish Media that took the soup. They’ve bin’ gifted plenty of news to fill their column inches and shows. News they can’t contradict or manipulate. Safe and uncomplicated stuff.

As an industry they must accept they have failed. And it’s not just falling sales or the internets’ fault.

With all their talk, their airs and graces, and award shingdigs and mwah mwah ‘what do you mean ‘you weren’t invited?” status, the traditional newspaper and other old school media were so easily bought it would appear that they never had too high a price anyway.

All the best folks.

Yesterday: “Part Of Our Deal Is That We Don’t Have Any Moniker Such As ‘Advertorial’”

23 thoughts on “Bought And Sold”