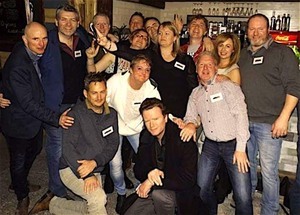 Sometimes you just get lucky in life.

We went to a Christian Brothers School, up to the age of twelve. Our teacher was a nonce. Served a lengthy sentence for multiple counts of child sex abuse. He had his own private bathroom in the class. How transparent. Bastard tried it with me. First time I fought an adult. And almost won.

That was our primary school. Couldn’t get out of the place fast enough. But the nonce had other plans. The Christian Brothers had a secondary school next door. I was destined to go there. We had to do an entrance exam. But it was all a done deal. An all boys school. All ripe. All ready.

On the other side of town was the Vocational School. The Tech, they called it. The shithole. For the poor folks and the dumb fucks. The rejects. The rabble. At least that’s what the snobs said. The snobs and the Christian Brothers. It was also a mixed school. Boys and girls. Nobody ripe. Nobody ready. All curious as hell.

We used to have to line up for the nonce before entering class. He was from Belfast and reckoned himself a quasi-military man. The boys he wasn’t sexually aroused by he simply beat.

He had a Masters Degree in Humiliation. The day of the entrance exam for the shithole school, he ordered the boys who were going to do the exam to take one step forward. Every poor bastard he had ever tried to break stepped forward. The rest of us stayed where we were. He was happy with the result. A line of winners and losers. Eugenics in full flow.

I was too scared to breathe. Sweating. Paralysis. But some things need to be done. I forced my skinny, trembling, twelve-year-old frame to step forward. The nonce did a double take. Loving the theatre of his own making.

He stood in front of me. I could smell his cigarette breath. Feel his spit on my face. He told me to get back in line. Everything in me wanted to fold like a cheap accordion. But I looked at him. My voice barely broken yet. I said, “I’m going.”

He didn’t get angry. He got off on the skinny defiance. Grinned. Aroused. ‘Okay, boy.’ Your skin would crawl at the way he used the word ‘boy.’ He put his mouth close to my ear but spoke loudly so everyone could appreciate his stature.

‘You can do the exam but you’re not going to that school. Ya hear me, boy?’

I nodded. Defeated. Knowing he was right. Knowing that the entrance exam for the Christian Brothers secondary school was the following Saturday. Knowing my fate was sealed.

We crossed town to get to the shithole school. Me and that motley crew of miscreants. Some of the best men I would ever meet. We had to go through a public park.

The closer you got, the more you could feel the greasy grip of the Christian Brothers lessen. And the girls. Everywhere. One more beautiful than the next. We were only twelve years old but it felt like our hearts were too big for our chests.

We sat the exam. Giddy with hormones. Then returned to our Christian Brother madhouse. The nonce ridiculed us as we took our seats. A particularly ugly grin for me. ‘See you at the exam on Saturday, boy.’ I wanted to punch his head in. Perhaps someone is doing it to him in prison right now.

That Saturday morning my folks got me and my brother up early to sit the Christian Brothers entrance exam. I said nothing. Ate breakfast. A simple plan had formed. Only a simpleton could have come up with it. We walked there. Me and my athlete brother. Him, the perfect specimen for Christian Brother GAA glory. Me, the perfect gammy-legged gimp.

The nonce wanted me dead. Probably to fuck the corpse. But I was going to a place where raping children wasn’t the top priority of most of the teachers. The Tech.

A place so fucking beautiful it became our Paradise.

From day one everything was different. My brother’s secondary school seemed hellbent on ripping the underpants of every vulnerable boy so far up their backside that it took months for their testicles to recover. Wedgie, they called it. And how they laughed. Like psychopaths inhaling a deep y-fronted high only they could understand. We, on the other hand, were walking around a building possessed by angels. Real ones.

The girls were so much more mature than us that the idea of giving anybody a wedgie made you feel like a moron. While the boys in the Christian Brothers school were busy learning how to flick towels at naked arses in the shower room, we were getting lessons in how to be men. By the most formidable women we could ever dream of meeting.

The teachers were amazing too. Mostly. No doubt there was the odd degenerate. No doubt some of those girls have some of their own horror stories. No doubt those stories were buried, like everything else in our culture at that time. Just like now.

I remember the girl who told me what her father was doing to her at night when her mother went to bingo. She needed help. Decided I was the one to tell. I had no idea what to do. I approached the religion teacher. Not because I gave a fuck about religion. But because she was a beautiful woman. Inside and out. She handled it with the seriousness that it deserved. Then the girl told me it had stopped. But she looked sad. Not relieved. Soon after, she left school. Never saw her again.

There is a hundred-thousand stories to tell of that school. Of those people in it. Of the boys and the girls. First loves. Fist fights. Broken hearts. I hated home. But I loved that place. Mornings couldn’t come quick enough. Entering that building was like strolling into a John Hughes movie.

Every snobbish statement about the school proved to be horseshit. Our headmaster was the wisest, kindest, white-haired man a kid could ever hope to encounter. Same with most of the teachers. All the way to the janitor. We were too young to recognise just how remarkable our world was. It was rare as diamonds. And more valuable.

I had to leave the place at fifteen. Never got to finish school. Do the Leaving Cert. Go to the Graduation Dance. All the rituals. Big chip on the shoulder afterwards. For decades. But life went on. Stayed in touch with some. Lost contact with others. Yet always felt warm memories of all of them. Then a message came through. On Facebook. A Thirty Year Reunion.

It happened last Saturday. The night was long. The stimulants intoxicating. And the company sublime. The snap (top) of some of the many magnificent people who were there was taken before I snuck out the back door at about 3am. Hopped a taxi back to the hotel. Full to the brim with renewed love for these remarkable people.

Sometimes you just get lucky in life. Sometimes the Gods get together and decide to make magic in a rural town, in a shithole school, with the best folks a body could hope to meet.

And fuck the Christian Brothers.

24 thoughts on “A Class Reunion”