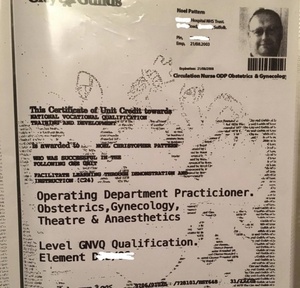 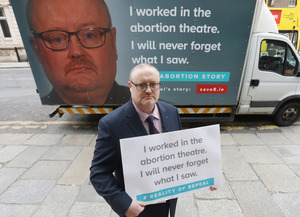 You may recall those ‘My Abortion’ story billboards. The Noel featured turns out is a fake. Save8.ie have since deleted his story (this is the cached page)

Considerable (well, not really. It was pretty straightforward) leg work went into proving this guy is not a nurse, has a city and guilds cert that appears altered (provided to us by Pro-Life activist John McGurk), has lied about his experience, is a self confessed convicted armed robber and self-professed gun runner…

Instead of doing the sensible thing and throwing him under a bus ( OMG he lied to us) John McGurk and Save the 8th are claiming Noel left the campaign because of bullying by repealers.

This was either a very clumsy attempt at duping folks or it was incompetence on a grand scale. Either way I for one hope they continue with such own goals. Its awfully entertaining!

I’m writing to provide some clarification to your piece .

The central claim of your piece is that Noel Pattern is not a registered nurse. Helpfully, you provide both a link to his video, and to the billboard ad featuring him, neither of which say he was a nurse.

The billboard says “I worked in the abortion theatre, I’ll never forget what I saw”.

Mr. Pattern served as an Operating Department Practitioner (ODP) in an NHS hospital from 2001 to 2005. I am happy to provide broadsheet, privately, with the contact details of Mr. Pattern’s colleagues who worked alongside him at that time if your website wishes to verify his employment independently.

An Operating Theatre Practitioner is the person who prepares patients for surgery, and assists those performing the operation.

When a surgeon says “scalpel, please”, it is usually handed to him by an ODP. ODP’s are often referred to as “circulation” or “scrub” nurses, even though they are not actually nurses.

The accusation that we have produced a false or misleading ad is completely false. The ad states simply that Mr. Pattern worked in an operating theatre when abortions were provided – this is absolutely true. Your piece says that “considerable legwork went in to proving that this guy was not a nurse”.

Sadly, this effort was somewhat in error, and could have been expended just as productively in an effort to prove that he was not an astronaut, either. The claim that he is a nurse simply doesn’t appear in our advertisement.

These attacks on Mr. Pattern are unfortunate, and have left him somewhat shaken. At his request, we have removed his name from her website, but for the avoidance of doubt, we stand over the content of the advertisements we issued.

And yet here you are offering to provide his nursing certificates pic.twitter.com/3BDdtXQsne

Just to add to @broadsheet_ie piece on Noel Pattern. John also claimed Noel did not go to prison…. pic.twitter.com/Bh5ZmkeIUA