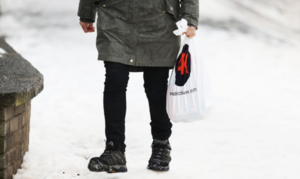 A woman walking in the snow in Glasnevin on March 4

I note that the current hospital bed crisis is in part due to pressure from slip and falls that occurred during the recent storm.

One contributing factor must be our apparent inability to clear snow from public paths and around homes.

This is not due to laziness or lack of civic pride but rather equipment failure.

I cleared 20 metres of snow at 8am each morning with a €7 snow-shovel.

I noticed other people using spades, garden hoes and even fireside shovels in futile attempts to keep paths clear.

What would be the cost saving to thousands of €7 shovels being left in town centres and on street corners during such weather events – allowing us all to play our part in keep this country moving and injuries down?

We could even allocate Tidy Towns points for additional motivation!

For the price of a shovel (Irish Times letters page)

How Not To Move Your BMW On An Icy Road

Snow In Your Area

42 thoughts on “Don’t Forget Your Shovel”