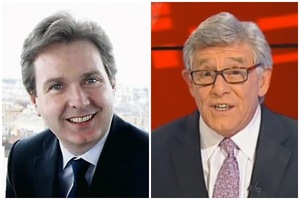 On RTE Radio One.

Áine Lawlor spoke to former Irish Independent Sam Smyth who was named by the paper this morning as being one of the so-called 19 former and current workers at Independent News and Media who had their data breached by a third party paid for by a Denis O’Brien-controlled company.

Readers should note that RTE is reporting group editor-in-chief at INM Stephen Rae – who was recently appointed to the European Commission High Level Expert Group tackling Fake News – as saying those involved had been contacted.

“The Editor-in-Chief of Independent News & Media (INM) has assured staff their welfare is the company’s primary concern, following allegations of a significant data breach.

“Stephen Rae told staff individuals from the company who had been named as having their emails searched had been informed.”

Mr Smyth, who told Ms Lawlor he got a call “from a friend” last week, telling him he was one of this group, says he hasn’t received any word from INM.

Former INM executive Karl Brophy, who has also been named as one of the 19, has tweeted the same…

Sam Smyth: “I said, ‘how do you know?’. Well, he says, ‘there’s this list going around, a list of people who were apparently had all of their communications with INM monitored, harvested and so on’. I took it at that. I could get no other detail. I heard nothing whatsoever from INM or anybody else in authority there. The first time I saw it confirmed was this morning when it was in the Irish Independent.”

Aine Lawlor: “So what you are going on, in terms of knowing you’re one of the INM19, so-called, who are part of this alleged data breach, you’re simply going on what’s been reported in public – nobody has contacted you to say ‘there may have been an alleged breach of your data while you were working at Independent News and Media’. Is that correct?”

Smyth: “Nobody whatsoever, people who have a knowledge about the media, about those things, did say it to me. When I read it in the Irish Independent, I took it seriously, because it’s Irish News and Media (sic) that’s in the firestorm of all this, so you would assume if anybody had knowledge of it, it would be them. But I saw my name in the paper, and I’m therefore prepared to believe it.”

Lawlor: “So you’re believing the reporting by Independent News and Media, what’s your reaction?”

Smyth: “Not as surprised as you might have thought. For a long time, rumours were flying. Different people said to me, some people involved in security said to me ‘be very careful with your telephone communications’, ‘be very careful with this’, I would be naturally quite cautious anyway about emails and would have used my own email address a lot on this, but your never know.

“Obviously, when I worked there, I was communicating regularly with Independent News and Media – so yes, I am in one way, I’m a bit annoyed about it, but I’m certainly not surprised.”

Lawlor: “So now that you find yourself here and now that your name has been published in the paper, Sam Smyth, what do you propose to do?”

Smyth: “What I will do, is I will certainly take advice from people much more skilled in these things than I am. I really don’t have any detailed knowledge of the law on those things. I would have to take advice on that but when I heard about it, I certainly wasn’t shocked. You know I was, there was an air almost of inevitability about it. Because we had spoken about this for some time.

“Am I very annoyed? Not very annoyed, it’s the sort of thing I expected might well turn up some day.”

Lawlor: “And of course you’re a journalist who, in your long career, has dealt with so many stories, but one in particular has involved an awful lot of controversy and that’s the Moriarty Tribunal which you reported on at your time at Independent News and Media.”

Smyth: “Yes, I was very prominent in the coverage of that, I sat on the Moriarty Tribunal for ten years. I’ve often thought had I done a crime, I would have been out a lot quicker. But I sat there for 10 years, I certainly have a working knowledge of it and had written extensively about what was going on. And now, clearly, this upset some people…”

Three Points In The Bag

17 thoughts on “‘I Heard Nothing Whatsoever From INM’”