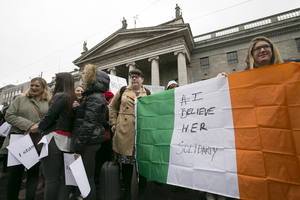 Last  Wednesday’s verdict was a difficult day for survivors of sexual violence and trauma – not because the verdict was flawed – but because our culture is.

Comedian Linda Hayden, herself a survivor of an horrific rape, had the following to say on Twitter,

“Today is about us rape survivors texting each other to check we are all OK. The answer is no, we are not.”

It is never wise to dispute a jury’s decision but only a fool would suggest that nothing should change in the aftermath of this particular verdict.

While on one hand we can accept it, we cannot accept the attitudes that the case illuminated. Momentarily we glimpsed inside the mind of youthful misogyny – and it is darker than any of us could have imagined.

The men involved now face into the future knowing things could have been a lot brighter and neither the complainant nor the  acquitted will ever carry themselves in quite the same way again.

If this case has done anything useful, it’s shown that we need to get real about how exposed our young men are to the toxic attitudes around sex, and how this in turn exposes not only our daughters, but also our sons, to risk.

As parents, we  need to get real about our own experiences before we can even start working it out for our children: how can  we reasonably expect boys to learn that actions have consequences when the system consistently fails to make grown men accountable?

How can we reasonably expect young men to respond appropriately to the conversation around consent if victims themselves cannot yet describe their experiences without shame and fear of being called a liar?

How can we reasonably expect men to know where the line is when we don’t always know ourselves when something criminal has occurred?

And how can we stand over the fact that an estimated eighty percent of sexual assaults go unreported?

It wasn’t until the #metoo movement in the aftermath of the Weinstein allegations that I began to look back on my own experiences with new understanding.

It took 12 years for me to realise I had been sexually assaulted by that stranger when he twisted my  nipple as I passed him on the street in broad daylight. Rather than make a “fuss”, I kept walking, in case confronting him made matters worse.

Some years later in a Spanish nightclub, a young Englishman, unknown to me, grabbed my vagina, hard, over my clothes. This time I wasn’t so polite and I slapped him – hard  – across the face.

What was most interesting about the incident was that he looked genuinely hurt by my response.

Now in my thirties, I can look back at my twenty-something self and feel a sting of menace towards that really nice guy I had been seeing who proceeded to have unprotected intercourse with me, moments after assuring me he would use a condom.

It is only now, thanks to the women who have spoken out ahead of me, that I can begin to understand that these were in fact criminal acts.

With this greater understanding comes a deep sense of relief and I no longer feel obliged
to stay quiet out of politeness. I have also been conditioned into believing I am ‘lucky’ for getting off ‘lightly’.

These attitudes demean men just as much as they demean women.

After Wednesday’s verdict was read out, I emailed the man I mentioned above to let him know  that what he did was criminal. Call it doing my bit towards ending a culture of male sexual entitlement that thrives on women staying quiet.

Instead of being heartbroken again on Thursday, comedian Linda Hayden decided to change the things she could no longer accept.

Dozens of people have responded to her call to action and an alliance of survivors, professionals and allies convened earlier this week to plan a road map for action in the aftermath of events in Belfast.

Action Against Sexual Violence Ireland (AASVI) intends to support victims while also being a vehicle for change.

Linda tells us that people need to channel anger into action:

“For now we are talking, and in talking we are creating  safe spaces that are charged by anger but soothed by healing. We will not stop until perpetrators of sexual violence are held to proper account.

The women and men who experience rape, sexual assault and trauma are not vessels or playthings and we are no less than the victims of any other crime.”

Those who question whether #metoo has gone too far should be reminded that silence is an ally of abuse.

If we want  make meaningful change we need to stop being polite and start making people uncomfortable about sexual violence and assault, especially those who are responsible for committing it.

The time for quiet politeness is over.