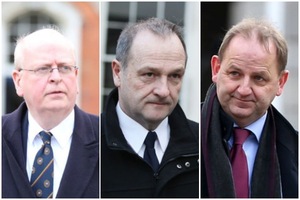 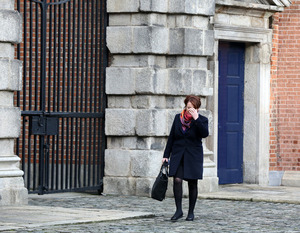 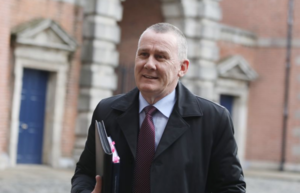 The Disclosures Tribunal is examining claims that a smear campaign was conducted against whistleblower Sgt Maurice McCabe.

There is currently a break in the tribunal’s hearings until April 30.

Earlier this week, and last week, the evidence given by witnesses mainly related to events in January 2014.

These events included former Garda Commissioner Martin Callinan’s appearance before the Public Accounts Committee when it was examining the quashing of penalty points, and what he’s alleged to have said about Sgt McCabe before and after that meeting; Mr Callinan’s meeting with the then chair of the PAC and Fianna Fail TD John McGuinness in a carpark on the Naas Road in Dublin; and comments made by celebrity solicitor Gerald Kean on RTE Radio One’s Marian Finucane Show – for which RTE subsequently paid out €180,000.

But one witness this week, Supt Frank Walsh, who was private secretary to both Mr Callinan and his successor Nóirín O’Sullivan, gave evidence that seemed relevant to a previous module which looked at the O’Higgins Commission of Investigation of 2015.

In that module, Judge Peter Charleton was tasked with examining if Ms O’Sullivan inappropriately relied upon unjustified grounds to discredit Sgt McCabe.

Readers may recall that central to the O’Higgins Commission of Investigation was the famous Mullingar meeting which whistleblower Sgt Maurice McCabe had with Supt Noel Cunningham and Sgt Yvonne Martin on August 25, 2008, and Sgt McCabe’s equally famous secret tape recording of the same.

Prior to the Mullingar meeting, in February 2008, Supt Michael Clancy requested Sgt McCabe to draw up a report about his dealings with the D family.

When Supt Clancy made this request, he said he would use Sgt McCabe’s report to see if he could get the DPP’s directions shown to the D family.

It came after Sgt McCabe had been confronted by members of the D family in public in October 2007.

[Ms D had made an allegation of ‘dry humping’ against Sgt McCabe in December 2006 and by April 2007, it was found to have no foundation by the DPP. Sgt McCabe was informed of the DPP’s full directions almost as soon as they were released by the Cavan state solicitor Rory Hayden in April 2007 but Sgt McCabe didn’t disclose this detail to anyone in An Garda Síochána until he gave evidence at the O’Higgins commission in May 2015].

Sgt McCabe obliged with Supt Clancy’s request and then subsequently Supt Clancy asked Supt Noel Cunningham to look at Sgt McCabe’s report. This gave rise to the meeting in Mullingar.

It was alleged at the O’Higgins Commission of Investigation – which ran from May 2015 to December 2015 and looked at allegations of poor policing in Cavan/Monaghan, as made by Sgt McCabe – that, at this Mullingar meeting, Sgt McCabe had admitted to engaging in a kind of blackmail-like scenario.

A letter from the Chief State Solicitor’s Office to the O’Higgins commission – which was furnished on the instructions of the then Garda Commissioner Noirin O’Sullivan on Monday, May 18, 2015 – referred to the Mullingar meeting, stating:

Later that same day, the false blackmail allegation was put to Sgt McCabe – by Colm Smyth SC, for Ms O’Sullivan and senior gardai – when Sgt McCabe was in the witness box:

Smyth: “In the course of that [Mullingar] meeting, Sergeant, you advised Superintendent Cunningham that the only reason you made a complaint against Superintendent Clancy was to force him to allow you to have the full authority directions conveyed to you?”

McCabe: “That is absolutely false.”

McCabe: “That is absolutely false. Absolutely.”

McCabe: “I have a clear recollection of that meeting…”

And later, when the legal team for Ms O’Sullivan and senior gardai submitted their written submissions to the O’Higgins commission, in June 2015, the false blackmail allegation was repeated yet again.

Part of the submissions read:

“It is understood that Superintendent Cunningham will give evidence that Sergeant McCabe said at that meeting that the complaint which he had made alleging lack of support, as referred to in the preceding paragraph, was a bid by him to have the full DPP directions conveyed to him and the complaining party. This is recorded in a report of the meeting prepared jointly by Sergeant Martin and Superintendent Cunningham.”

The O’Higgins commission broke after it heard evidence on May 19, 2015 and it didn’t resume again until June 24, 2015 – by which time the transcript of Sgt McCabe’s tape recording of the Mullingar meeting had been circulated among the legal teams.

When it resumed on June 24, 2015, the false blackmail allegation was dropped.

In the words of Kathleen Leader BL, for the Disclosures Tribunal, at this tribunal earlier this year, after Sgt McCabe’s tape emerged, “…the matter of a threat at Mullingar meeting was negatived.”

The Disclosures Tribunal – which is looking at allegations of a smear campaign against Sgt McCabe – looked at this series of events, and others related to the O’Higgins commission, in January and February of this year.

And at the tribunal, just like at the O’Higgins commission after Sgt McCabe produced his tape, the false allegation of blackmail was simply put down to error.

Significantly, it was said at O’Higgins – and it was repeated at the Disclosures Tribunal, not least by former Garda Commissioner Noirin O’Sullivan – that the error was that the word “to” should have been used instead of “against”.

But this reasoning has never fully explained why it was alleged Sgt McCabe had made a threat of force of some kind.

Where did that come from?

On Tuesday of this week…

Supt Frank Walsh, who was private secretary to former Garda Commissioner Martin Callinan and then private secretary to his successor Noirin O’Sullivan, was asked if he had heard rumours about Sgt McCabe in late 2013/early 2014 – a whole year before the O’Higgins commission began.

He told the tribunal this week:

“I suppose the motive that was being spoken about at the time was that he wasn’t happy with how the DPP’s directions were conveyed to him arising out of the alleged incident that occurred some years previously, and that perhaps that he was some way annoyed over this as well and was getting his own back on his management. They were the types of rumours.”

It should be noted that the tribunal has heard Sgt Martin never gave evidence at the O’Higgins Commission of Investigation, never saw the Chief State Solicitor’s letter and never saw the written submissions.

And yet, when news of what had happened at the O’Higgins commission broke in May 2016, the then Garda Commissioner Noirin O’Sullivan referred both Supt Cunningham and Sgt Martin to GSOC – despite her telling the tribunal that, at the same time, she understood what was put forward at O’Higgins to have been a mistake.

This is how Ms O’Sullivan explained her actions when she was questioned by Judge Charleton:

Judge Peter Charleton: “If you had said she had never given evidence, I would imagine people might well have believed you.”

O’Sullivan: “Not necessarily, Chairman, the position that we found ourselves in…”

Charleton: “Well, then the second thing was, if you actually read her statement, and this has come up a number of times, but, well, you know, she may well have her rights, but this statement which she gave, which could perhaps have been, to use the now very popular word, deployed at the O’Higgins Commission, was completely backing up Sergeant McCabe…”

Charleton: “…in relation to the Mullingar meeting, in the event that there was a misunderstanding about that.”

O’Sullivan: “Yes, completely, Chairman, and I think the unfortunate situation that everybody found themselves in, the erroneous facts and the distorted truths that were put into the public domain led to a situation which was completely unfair to everybody involved in this process from the outset.”

Despite this explanation, Judge Charleton told the tribunal (of the decision to send the two gardai to GSOC):

“That is something that I won’t understand until my dying day, particularly Sergeant Martin.”

Colm Smyth SC, who represented Ms O’Sullivan at the O’Higgins commission, apologised to Sgt McCabe for “the false matter that was put” in the CSSO letter – when he gave evidence to the tribunal earlier this year.

“Can I say this: it was remiss of me not to apologise to Sergeant McCabe in relation to that matter. It should have been done. And I’m not making excuses for it, but I think it happened in the context of the way matters were moving. Because this, again, was revisited in June. We were dealing — things were moving at a fast pace, but that is no excuse. There should have been — I regret that it was done. It was done on the explicit instructions of the client, who got it wrong.”

The tribunal concluded its latest tranche of hearings on Tuesday.

Why Did Noirin O’Sullivan Ask GSOC To Inquire Into An Allegation That She Believed Was Just A Mistake?

5 thoughts on “The Mullingar Meeting”