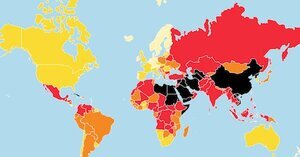 The 2018 World Press Freedom Index has been announced.

Ireland has dropped from its ranking of 14th last year to 16th this year.

Reporters without Borders – which is behind the index – explains:

The highly concentrated nature of media ownership in Ireland continues to pose a major threat to press freedom, and contributed to Ireland’s two-place fall in the 2018 World Press Freedom Index.

Independent News and Media (INM) controls much of the daily and Sunday newspaper market, while broadcasting is dominated by the semi-state company RTE.

The 1937 constitution guarantees media freedom, but defamation suits are common.

The high damages awarded by Irish courts in defamation cases have prompted calls for a review of Ireland’s defamation legislation.

The general scheme of the Communications (Retention of Data) Bill, published in October 2017, has been criticized for failing to provide specific protections for journalists.

In November 2017, the Standards in Public Office Commission tried to force a journalist to provide confidential information related to his investigations into alleged planning irregularities.

Interviewing police sources has been virtually impossible since the Garda Siochana Act of 2005, which bans police officers from talking to journalists without prior authorisation. Officers contravening the ban risk dismissal, a fine, or up to seven years in prison.

Ireland As Seen By Air France And Surfers