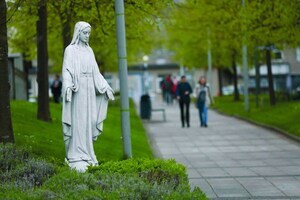 Sometimes I wonder why, as a nation, we seem to be obsessed with what happens to anything pertaining to female body parts yet simultaneously obsessed in doing everything possible to avoid dealing with the many complex matters involving said biology. These last few days have been a particular doozy in this regard.

The ongoing Repeal debate where NO campaigners want to control uteri everywhere?

The Cervical Check horror story where clinicians took decisions NOT to inform women of negative results – decisions which it has now been proven have cost lives.

Or what about the revelation regarding the governance structure of the new National Maternity Hospital (NMH) where we’ve learned that the directors of the company that will take ownership of the new campus on which the NMH will be located, will be obliged to uphold ‘the values and vision’ of Mary Aikenhead and the religious order she founded, namely the Sisters of Charity.

Yes, those same ‘Sisters of Charity’ who were most uncharitable when it came to their Magdalene Laundries. The same uncharitable order who ran five industrial schools best described as torture camps.

The same Sisters of so-called Charity who told the Ryan Commission that they felt the definition of abuse was too broad and who would only commit to paying €5 million in redress. That was 2009. To date they have only paid €2 million. Full of charity so they are.

And now it appears that a long overdue state of the art and publicly funded €300million euro maternity hospital is about to be handed over, in all but name, to the St Vincent’s Hospital Group (SVHG) which is 100% owned be the Sisters of unCharity.

The proposed structure ensures that the SVHG will have 100% control of the Board of Directors of the campus as well as 100% ownership of the company. In effect, the Clinical Director of the hospital will have to answer to a board controlled by the nuns. The same board which must ensure that the ‘values and vision’ of the religious order are upheld.

But that presents a problem see? Because I’m willing to bet that those so-called ‘values and vision’ are the same values and visions which condemned women to a life of torture and servitude for daring to have sex outside of marriage.

The same values and vision which withheld pain medication to young women in childbirth so that they might ‘pay for their sins’.

And the same values and visions which seeks to continue to deny sexual and reproductive healthcare to women in this country by their vociferous defence of the 8th Amendment.

By any standard these are not the type of people you want to put in control of a modern National Maternity Hospital. So why is it even under consideration? A legitimate question but one so complicated in an Irish context that it would stagger the mind of anyone from outside this country or not involved in religious fundamentalism.

It’s because 21st century Ireland still hasn’t managed to separate Church and State. It’s because our State has such an ingrained culture of farming out responsibility for basic public services to charities and religious orders.

This is why we have a battle to free our children from a dogma-delivering education system. It’s why we are still working through the legacy issues of our social care being farmed out to these orders over the years.

And it is why women’s healthcare in this country, when it comes to anything below the naval, is continuously second rate.

It is not because many of the medics working in the system want to treat women as second-class citizens, it is because they are forced to work within a system governed by religious ‘values and visions’ and the reality is that such fundamentalist values and visions derive from a religious base whose sole purpose is to propagate the dogma that the only women worthy of praise are those who are virginal and who exist to serve men.

Ireland is not that place anymore yet in so many ways it still is. The need to separate Church and State has never been more obvious nor the timing so right.

If we don’t intervene now to stop the transfer of a major public asset, and with it women’s sexual and reproductive healthcare, into the control of a religious order, then we may as well walk away from any pride we might have felt when the Magdalene women got their much over-due apology in the Dáil.

We may also accept the shame every right-minded person felt when Savita died in one of our maternity hospitals because to go ahead with this transaction upholding the religious ‘values and visions’ will guarantee more tragedies like Savita’s and that is a vision we cannot abide.

55 thoughts on “Get Your Rosaries Off Our Ovaries”