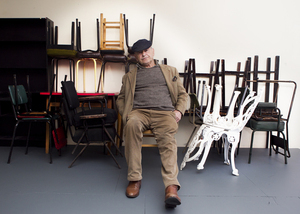 Tom Murphy, in the Abbey rehearsal room on the first day of rehearsals for the  production of his play ‘The House’ in 2000

“The importance of Tom Murphy’s contribution to Irish theatre is immeasurable and outstanding. We have had no greater use of language for the stage than in the body of work produced by Tom Murphy since his earliest work in the 1960s.

His themes were not only those which had influenced the very essence of Irishness, immigration, famine and loss – they were universal in their reach.

From the early beginnings of his writings in Tuam, Tom Murphy produced a unique and often provocative body of work. He was above all the great playwright of the emigrant, more than anyone capturing, in a poignant, creative way, the transience that is at the heart of the emigrant experience.”

Put Me Down For Two. Yes, All Six Days. Near The Aisle.