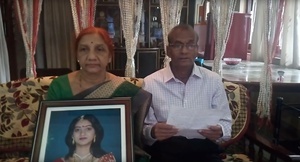 “My dear brothers and sisters of Ireland, I am Savita’s unfortunate father Andanappa.

Speaking on the historic event of repeal of the 8th amendment. The day of the people of the island who now know the pain and the memory of our loving daughter Savita.

No family in future should have to undergo what we have gone through, the worry and sorrow that’s still persistent in our hearts even after some six years. The life that Savita had, she had a very long life to lead, but it was cut down mercilessly, dead.

I strongly feel that the younger daughters of Ireland should not have the fate of Savita.

I hope that people in Ireland will remember the fate of our daughter Savita on the day of the referendum and vote Yes so that what happened to us won’t happen to any families. And by doing this you will be paying a great debt to the departed soul. Thanking you very much.”

Andanappa Yalagi, in a video released by Together 4 Yes this morning.

Savita Requested And Was Denied A Termination